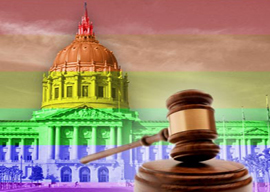 The amendment of Sen. Roy Blunt would have assured Catholic institutions and Catholic employers of their freedom to opt out of providing health insurance coverage for contraception, abortifacients and sterilizations for employees, if they have religious objections.

The position of the Catholic Church on this issue is neither new nor is it unknown. It was reaffirmed in 1968 in the famous encyclical “Humanae Vitae” of Pope Paul VI. Artificial birth control is unnatural and immoral. This is high among the beliefs that differentiate Catholic teaching from other Christian faiths.

Nor is it any secret. And any government that orders Catholic institutions and employers, against their religious beliefs, to provide contraceptives, “morning after” pills or sterilizations for employees has crossed the line between church and state to trample upon the First Amendment religious freedom it was established to protect.

Sandra Fluke, a 30-year-old student at Georgetown Law School, has emerged as the heroine of the Democratic establishment, being phoned by President Obama after her excoriation by Rush Limbaugh.

And what is Fluke’s demand? That Georgetown University pay for and provide birth control for herself and all coeds and law school students.

Consider if you will the chutzpah on display here.

Fluke attends one of the most prestigious law schools in America. She is among a cognitive elite whose future is secure. Why should she not pay for her own birth control, even if she has to borrow money? Why is providing her birth control someone else’s obligation?

This is not an abandoned woman on welfare. Why should other students or the university be forced to foot the bill for Fluke’s exercise of her freedom to pursue her personal lifestyle? She has talked of $3,000 a year being the annual cost of birth control for a Georgetown student.

Georgetown University and its law school presumably remain Jesuit institutions. For Fluke to demand contraceptives or birth control pills for herself and her fellow students is to demand that Georgetown enable and subsidize behavior the church and the Jesuit community teach to be immoral.

Fluke has an extraordinary sense of entitlement.

Undeniably this episode, where the Democratic Party, traditional political home of America’s Catholics, is now demanding that Catholic institutions and employers be forced to subsidize what their church teaches to be immoral conduct, tells us much about the sea change that has taken place and is taking place across America.

The America of Barack Obama that is emerging appears to be a country where civil disobedience may yet become a duty of traditional Christians and devout Catholics.

The historian Arthur Schlesinger Sr. once called anti-Catholicism “the deepest-held bias in the history of the American people.”

In Obama’s Washington, it is becoming so again.