On the Mafia’s Doorstep 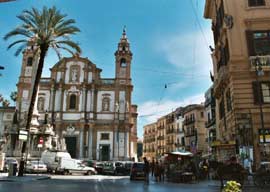 The Mafia has not understood that the city has changed. We are now a city of immigrants, and the Mafia bosses no longer sit in the mayor’s chair….This Mafia shooting was a tremendous mistake because it turned the city against them. The Mafia needs silence and darkness. It needs people to keep their mouths shut….When it does such a brutal act, shooting a young guy, the mayor switches on the lights and the whole city comes after them.

Giovanni Zinna, a former social worker and neighbor of the alleged shooter for 15 years, calls Rubino an “animal” and predicts a full-blown criminal gang war on the streets of Palermo:

It is the beginning of a war between the Mafia and the migrants. It is going to get worse. I am scared. There will be more migrants, more friction, more attacks. This was the first shooting, but it won”t be the last.

What seems disturbingly evident in Italy, as in the rest of the EU, is that any indigenous resistance to the forced browning of Europe is slowly being criminalized. When the natives are treated as born sinners who deserve their eventual extinction at the hands of hostile invaders, it becomes uncomfortably evident that the chief targets in the European Union’s crosshairs are Europeans themselves.

If you’re cynical about democracy like I am, you tend to view the government as merely the biggest gang in town, just an overblown, predatory, self-justifying protection racket.

But when the protection racket turns against those it purports to protect, that’s when groups such as the Sicilian Mafia step in. Despite what the news reports are pushing, I suspect that the average native Sicilian is pulling for La Cosa Nostra to win this one. When the “good guys” are causing the problem, the “bad guys” may be the only ones who can fix it.