On to Tehran—or Is It Damascus? 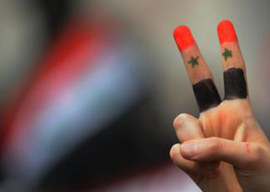 Should America start funneling arms to the rebels, Assad will realize that, like Moammar Gadhafi, he is in a fight to the death.

In 1982, his father, to crush a rebellion centered in the city of Hama, rolled up his artillery and leveled the town, killing an estimated 20,000. This is what we are risking if we start arming the rebels.

Syria is not Libya. Assad’s arsenal of missiles, tanks, planes and guns is far superior. He has a 270,000-man army and thousands of security police.

And with a tiny Shia Alawite sect dominant in Syria, and the rebellion rooted in a Sunni Muslim majority, Assad and his loyalists know that if they go down, they go to the wall.

“Christians to Beirut and Alawites to the wall,” was an early slogan of the resistance.

And after seeing the atrocities visited upon the Christians in Iraq when Saddam went down, and on Copts when Mubarak went down, do we want to depose another secular dictator—only to empower another regime of Islamic fundamentalists?

In Libya, the British and French led us in. Those NATO allies want no part of a Syrian civil war.

In Libya, a third of the country was rebel-held territory. With a single coastal road leading from Gadhafi’s command post in Tripoli to Benghazi, NATO planes could easily interdict convoys trying to reach the rebel base.

In Syria, the rebels have no “liberated” territory.

U.S. intervention could also trigger a proxy war and a regional war. Assad’s ally, Hezbollah, is already battling Syrian rebels in Lebanon. Sunnis in Iraq’s Anbar province are shipping guns to their fellow Sunnis in Syria.

And if Assad falls, who rises?

Would a triumphant Muslim Brotherhood in Damascus keep the peace on the Golan Heights, as the Assads did for 40 years?

According to U.S. sources, al-Qaida was behind the four suicide bombings that killed scores of Syrian soldiers and officials in Damascus and Aleppo. Osama bin Laden’s successor, Ayman al-Zawahiri, has called on Sunnis from all neighboring countries to join the war against Assad’s “pernicious, cancerous regime.”

If the ouster of Assad is good for al-Qaida, can it also be good for America?

As for the Free Syrian Army to whom U.S. military aid would go, it is divided with itself, and one ranking colonel has described the Syrian National Council, with whom we have been working, as “traitors.”

Iraq, Afghanistan, Libya—none has turned out as was predicted when we plunged in. And other than neoconservative ideology, what makes us think intervening in Syria will?