Pathologies of Our Peculiar Age 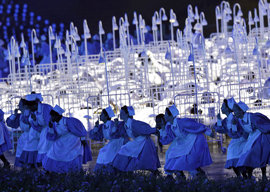 The Games are like a great lens, magnifying all the pathologies of our peculiar age. The opening ceremony was one long, monstrous illustration of this truth, pathology after pathology paraded before us as if old London was a beggar displaying his sores: stagnant popular culture, progressivism’s bogus iconography, rampant “diversity,” and a kind of valetudinarian supremacy forcing our attention toward the sick and disabled even at a festival of health and strength.

Poor Muhammad Ali, who though only one of the nine bearers of the Olympic flag“and perforce a token one at that, given his sad condition”was in a way the perfect emblem of what the opening ceremony was striving for: Black! Muslim! Pacifist! Disabled!

So no, I’m not much of an Olympics fan. And yet I watch and check the medal tables.

For all the globalist twaddle, for all the PC triumphalism, for all the gross waste of public funds, for all the North Korean-style massed choirs and dance troupes (which must have been an inspiration to the actual Norks: they have four gold medals, which is more than Germany, Great Britain, and Russia have)”for all that, the Olympics are still one place where nations compare themselves with each other.

Diversify us all you like. Shower us with multicultural imagery. Open our borders to all the world’s wanderers. Teach our children to hate their ancestors and despise their own race. Make us press “2″ for our own language. Still, nine out of ten people watching the Olympics, even in the terminally decadent West, are rooting for their nation (though not necessarily for the nation of their current domicile).

Well, well, no doubt we shall soon be One World, blending together in multicultural harmony. Then the true Olympic spirit will prevail: not nation against nation, only athlete against athlete.

By that time, though, as Randall Parker has speculated, the Olympic Games may be redundant:

Then we shall be able to dispense with the events and the spectacle altogether, awarding the men’s 200-meter butterfly gold to whomever has nucleotide sequence CCTAAACTCAGTGTGGCCCTGGCCCTGTGACATGCTGGCGATGCAGTCCC at the proper locus on chromosome 12.