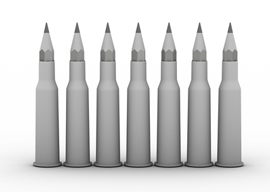 He was watching Fox News when they ran a story about Tactical 16, a military-focused small publisher run by an Iraq and Afghanistan vet who’s still in the service. Hernandez ran to email T16 while the story was still on his TV screen, and within a week he had a book contract.

T16 has a small reach (and painfully bad promo copy), but Hernandez is resigned to the likelihood that the mainstream publishing industry will never take an interest in him. He writes via email:

Guys like Lee Child can write ridiculous nonsense because they don”t know any better. If I wrote it, I”d be insulting every soldier who ever served in combat. … If I have any success, it will be with small publishers like T16. And with readers who don”t want to be spoon-fed whatever the big publishers decide will be most commercially successful with the target demographic.

Fresh writing may sell fewer copies than target-marketed gunk”at first. But if you clear away the publishing-bureaucracy parasites, you don”t need to gross as big. A specialized press like Tactical 16 is a compromise between traditional publishing’s high overhead and biased gatekeeping and the typo-ridden, undifferentiated sea of ebook mush.

The new print-on-demand platforms, like Amazon’s, seldom require up-front payment for printing, so the costs of launching a book can be stripped down to cover design plus proofreading. Small houses can afford to try new authors, risking little but their reputations”which can only benefit from vetting books for quality instead of conformity. Cut out the agent so authors don”t have to waste time and money courting middlemen, and even after Amazon takes their cut, the writer gets more pay per copy sold.

If thumbing your nose at the prestige of the “big six“ becomes the norm”I”m as surprised as anyone to hear myself say this, but: things may be poised to improve.