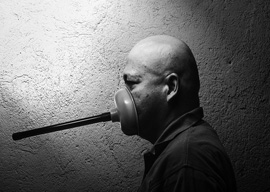 However, there is one way to at least partly clean your soul from the touch of evil: sich distanzieren (distancing oneself). To do so, you have to confess your sins to the general public”in newspapers, on television, via the Internet. You have to declare that you were wrong”terribly wrong”but that you have come to your senses. Confess that the right-wing Gedankengut (mindset) now disgusts you. You love democracy and multiculturalism.

Drygalla distanced herself from the NPD. So did her boyfriend. But not everyone is granted forgiveness. In many cases, even if you distance yourself from evil thoughts, you will stay umstritten (controversial). Being umstritten means that at some point some journalist or politician found it appropriate to throw some dirt in your face. In Germany this means you are marked”for years, maybe for life. From this day on, you may never be Herr Michael MÃ¼ller again”you”ll be der umstrittene Michael MÃ¼ller.

Things look bad for Drygalla. While wikipedia.de documents her Distanzierung, several German newspapers (Berliner Morgenpost, Stuttgarter Zeitung) and magazines (Stern) have already labeled her umstritten. One reason is that some Experten (experts) think that the Distanzierung of her boyfriend is not completely convincing. Die Welt cites one of those experts who calls his leaving the NPD an act of “foolish trickery.”

What makes someone an Experte on other people’s thoughts? To understand that, you have to know that being against the political right is a profession in Germany. Our government spends 24 million euros annually on a heroic Kampf gegen Rechts (struggle against the right). A nice share of this money is used to pay Experten who tell us if we should let an umstritten person return into demokratische Gesellschaft (democratic society) or not.

We might not have invented political correctness, but we mastered it. There is an old joke from the times of the German Democratic Republic (GDR) that illustrates our innate mastership:

Socialist party functionaries interrogate a young comrade. After one hour of talking, the chairman interrupts him angrily and asks: “We know all the things you are telling us, it’s the usual propaganda! Don”t you have an opinion on your own?”