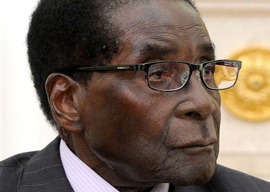 After 37 years of murderous and destructive rule, it looks like the curtain is finally coming down on the Mugabe regime. Military coups are seldom welcome, but few of Zimbabwe’s beleaguered citizenry are unhappy with this dramatic turn of events. After decades of misery, the prospect of life under “Gucci Grace,” the ghastly First Lady, provided a frightening future scenario that propelled the military into a direct and decisive confrontation. Almost universally this man is now reviled, and few will lament his political demise. But it was not always like that, and be mindful; he did not get to where he did without international help, and he could not have ruled for 37 years without the enthusiastic assistance of a liberal-socialist political and media machine that revered him no matter what he did.

British foreign secretary Boris Johnson spoke emotionally about “this beautiful country” that has suffered a “brutal litany of events” under the despotic rule of a man who has rigged elections and stands responsible for the “murder and torture of his opponents.” He said that “all Britain has ever wanted for Zimbabwe…is for Zimbabweans to be able to decide their own future in free and fair elections.” Prime Minister Theresa May expressed sincere concern for the safety of “British nationals” in the benighted country. These pronouncements resonate with the mood but invite some scrutiny.

Interesting to note that Her Majesty’s leader of the government is now concerned about Britons in the wake of a coup, but through the course of almost fifteen years of civil war, when Rhodesia fought to stave off the odious challenge posed by Mugabe and his forces, and thousands of “British nationals” faced the gravest of threats, the British government of the day resolutely backed the other side. And Boris Johnson’s recollection of history and Britain’s long-term commitment to “free and fair elections” is also rubbish. The fact is, the Mugabe accession to power was carefully choreographed through the ’70s by the wily mandarins of the Foreign Office, culminating in the Lancaster House Conference.

“The fact is, this catastrophe was allowed to happen largely because the Western world not only allowed it to, but enthusiastically aided it.”

Ironically, the only genuinely free election ever held in the country took place under European rule in April 1979 when a black majority government took power under the leadership of Bishop Abel Muzorewa, only for Mrs. Thatcher to renege on her promise to recognize it. “The lady who was not for turning” did a double somersault when confronted with the wrath of the African despots, who insisted on Mugabe as the leader of the new Zimbabwe and swiftly moved the goalposts to Lancaster House. Within those hallowed halls, her Machiavellian foreign secretary, Lord Peter Carrington, stitched up an agreement that (then former prime minister) Ian Smith rejected, but he was quickly drummed out of the negotiations so as not to blow the great con. John Giles, the Rhodesian legal expert at the conference, also warned against accepting the terms, and he was soon after found dead under highly suspicious circumstances. Ian Smith was unequivocal in insisting he was murdered. But Carrington and Thatcher got their way; Britain took back control of the country under the boozy governorship of Lord Christopher Soames and a farcical election was held during which Mugabe’s forces ran a violent intimidation campaign that decisively influenced the result in their favor. When then Rhodesian military supremo Gen. Peter Walls cried foul, called for a rerun, and demanded access to Mrs. Thatcher as previously promised, the door of No. 10 was slammed shut in his face.

A beaming Prince Charles, resplendent in his naval commander’s uniform, soon arrived to deliver Rhodesia on a silver platter to a richly undeserving Robert Mugabe, who thus came to power with the blood of thousands of his countrymen on his hands. Virtually the entire world, led by the liberal praise-singers of the mainstream media, with the BBC jubilant at the fore, cheered the dawn of “freedom” and the demise of “racist, settler rule.”

From then on Mugabe, hard as he tried, could do no wrong. He quickly set about destroying “the jewel of Africa” by dragging the country into an encounter with a command economy where he and his cronies would attempt to control all the levers in the public and private sectors while following a vaguely Marxist blueprint.

Tax levels were hiked to being some of the highest in the world, the best civil service in Africa was smashed, and his stated commitment to a nonracial meritocracy was a lie from the start. In all sectors, black political hacks, regardless of their experience or qualifications, were ushered into positions way beyond their ability. Antiwhite racism was institutionalized throughout the public sector. Detention without trial was the order of the day, and during his tenure there has never been anything remotely like a “free and fair election.”

When the threat of political opposition appeared early in the ’80s in Matabeleland, Mugabe reacted with a ferocity and brutality that would have cheered Stalin and Mao. A systematic state-sponsored genocide ensued, and scores of thousands were killed—more were maimed and tortured. The world looked the other way. Oxfam refused to speak out. Margaret Thatcher’s Conservatives defended the genocide, insisting that the Zimbabwean killers were merely addressing “legitimate security concerns.” As minister for overseas development, Baroness Chalker remained a loyal friend and was well-disposed to having her photograph taken holding hands with the man while romping up the steps of the State House.

British aid continued to flow freely, and Mugabe was frequently entertained by the Queen. The Conservatives under John Major paid him a parting tribute by rewarding his atrocious behavior with a knighthood. He returned from the investiture to Zimbabwe to explain that gays and lesbians should be evicted before referring to like-minded people as “worse than dogs and pigs…beasts…guilty of subhuman behavior,” and called for them to be removed from society. The Labour government of Tony Blair ensured that Zimbabwe’s police and intelligence services were well supplied with British-made equipment so the terror machine was kept in good order.