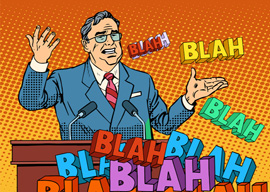 The politicians, like the rest of the class from which they are mostly drawn, feel no inner sense of limitation. For them there is no nature of things that cannot be abrogated by suitable legislation. Though they may have been elected to high office by only 30 percent of the adult population, they feel themselves infinitely responsible; and since there can be no responsibility without power, they feel they are or ought to be infinitely powerful. The laws that they pass determine not only what people are allowed to do but what they must do in order to be good and to bring about that earthly perfection that is the aim of government. Against this lack of inner sense of limitation the American Constitution itself is as much protection as a piece of old newsprint soaked in the rain.

Political correctness is another manifestation of limitless Prometheanism. It is the means by which inconvenient truths, no matter how obvious or permanent, may be overcome or abolished not by the wave of a magic wand but by a change of locution and vocabulary. Thus we must say what we do not and cannot believe, which has the advantage that there is no better way of undermining and destroying probity than to make people say what they know to be untrue but which they must strive to believe; for a population without probity can be easily molded into that supposedly perfect virtue that will lead to the heaven on earth of total liberation that it is the object of Promethean politics. It will never be brought into being because it cannot be, thus providing Promethean politicians with a permanent raison d”Ãªtre.

All this is splendidly dismal and hopeless, and lifts my heart as no optimism could ever do. But are people really quite as shallow as Delsol suggests (and I prefer to think)? Have not people been lamenting the decline of the human character for two and a half millennia? Ah, yes, but it so happens that this time it is true.