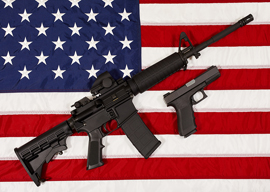 Many of the guns confiscated by police are in the possession of thugs, criminals and ex-cons who have no legal right to own them. Yet, if we are going to prosecute the illegal sale or transfer of weapons severely, we will have hundreds of thousands more in prisons, at a time when we are instructed to empty them of nonviolent offenders.

As for mental illness, it seems more prevalent than it used to be, and the numbers of those on medication seems a greater share of the population.

Do doctors decide which of their patients are fit to own a gun, and which are not? Should doctors be held criminally liable if they fail to alert police and one of their patients uses a gun in a violent crime?

Who will maintain the federal registry of the mentally sick unfit to own a firearm?

The anger and anguish of those who lost family or friends in this atrocity is understandable. But passion is not a substitute for thought.

There are twice as many guns in America as there were just decades ago. And a primary reason people acquire them is because they believe they need them to protect themselves and their families, and they no longer trust the government to protect them.

They view the demand for banning and confiscating specific weapons as a first step down the inexorable road that ends in the disarmament of the people.

Most mass shootings take place in gun-free zones, where crazed men of murderous intent know their chances of maximizing the dead and wounded are far better than in attacking a police station.

Our embassies are defended by Marines with M16s. Security guards with guns defend banks and military bases, presidents and politicians.

The best way to protect kids in schools may be to protect schools, and run down and incarcerate the known criminals and crazies who are the primary threats.