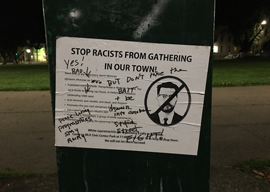 So, on April 15, when hundreds of patriots showed up to wave flags, support Trump, and hear other patriots speak, they were mad as hell and not going to take it anymore. Sure, they tolerated being disarmed by police as they entered. They recognized this was not the boys in blue doing this out of spite but a bunch of poor bastards following the orders of bean-shaped mayor Jesse Arreguin, who wants chaos so he can continue his war on Trump. He has admitted as much and told local news he wouldn”t invite Milo back because “the response was violent…and we need to balance…the right of free speech with the need to preserve public safety” (at about 6:00 in the link). After we were disarmed, the police must have had orders to stand down because they completely vanished. Soon after, the protesters surrounded the event and formed a moat of human filth around us so we could not get out. The speeches went on despite M-80s and rocks being thrown at the crowd. Then, when it was time to leave, something drastic happened. Instead of waiting for the police to come back, the crowd began fighting their way out. When they found an opening, they sent their women home and stayed to fight. Patriots beat the protesters mercilessly while dodging rocks and bricks and mace. It’s worth noting we didn”t throw the rocks back. We just tossed them aside. We were also the only ones with volunteer medics to help the injured. They didn”t care what happened to their guys. Our side knocked over barricades and stole the anarchists” flag. We sent the brats running and took back Berkeley. More important, we took back the culture. This wasn”t just a battle in the war. It was a tectonic shift in the culture. Antifa themselves have begun quitting in droves and publishing letters to their fellow revolutionaries asking, “Are you sure we”re the good guys?” 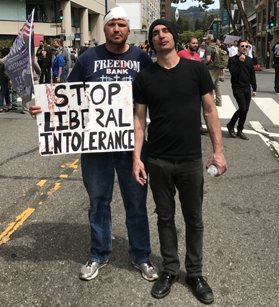 Since then, Moldylocks and the rest of the antibourgeois bourgeois are trying to spin the story. They claim they were just peace-loving protesters needlessly attacked. Moldy told CBS she was sucker punched out of nowhere, but we were there. We saw her “draw first blood,” as Rambo would say. Leftist propaganda is done because we know the truth, and the truth is they”ve all been lying. Alexis de Tocqueville recognized that democracy was much less efficient than aristocratic society, but when the people finally do get off their asses and fight, nothing can stop them. This is where we”re at. The momentum has finally hit its stride and nothing can stop it now.

On April 27, Ann Coulter is scheduled to speak at Berkeley. Proud Boys will be surrounding her at all times. Mayor Bean is likely to let the Gremlins attack the venue so he can prove that free speech is dangerous. We will be there to beat them back. If they cancel the talk altogether, we will also have won because we will have shown the rest of the country that the First Amendment doesn”t apply to the birthplace of free speech. It’s a win-win and for those of us tired of winning, this is getting downright exhausting.