Putin is Killing Millions of Americans! 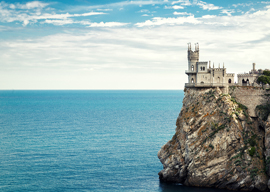 At the inception of the war, U.S. intelligence, British intelligence and the Senate Intelligence Committee concluded that Saddam Hussein had been seeking massive quantities of uranium from Niger.

But Joe Wilson was sent by his wife, a non-covert, paper-pushing CIA agent, on a trip to Niger, where he looked government officials directly in the eye and asked them: Did Saddam send envoys to this godforsaken country that has nothing to sell but uranium in order to buy uranium? Be honest! I have absolutely no way of knowing if you are lying, and powerful, nuclear-armed nations will be really mad at you if you say “yes.”

It was on the basis of this conversation that Wilson concluded, as he wrote in The New York Times: “I have little choice but to conclude that some of the intelligence related to Iraq’s nuclear weapons program was twisted to exaggerate the Iraqi threat.”

So doing an about-face on a previous, long-held position is no problem for liberals, provided it serves the larger purpose of getting Trump.

I don’t know if liberals have noticed, but trying to work the public into a white-hot rage over Putin’s annexation of Crimea hasn’t been wildly successful.

Apart from the fact that who owns Crimea is of absolutely no conceivable national security interest to the United States, Crimea has been a part of Russia since forever. (Technically, since 1783—when they took it from the Muslims, bless them.)

Google “Potemkin village.” The story is that an aide to Russian Empress Catherine II, Grigory Potemkin, tried to impress her with her newest territorial possession by setting up fake villages along their route through it. Dateline: Crimea, 1787.

The solution is staring us right in the face. Convince Putin to admit that he is responsible for the millions of foreign invaders sneaking into our country, depressing wages on a good day, and raping little girls and committing sickening murders on the bad days.

In exchange, we’ll give Putin Bill Browder and George Soros.