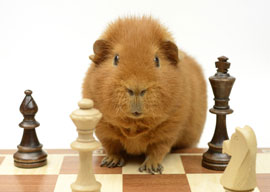 Consider Taiwan in 1970 and now, China in 1850 when the British thought its people hopelessly inferior, and, er, now. Or Korea in 1950 and now. Or Koreas North and South”same genetics but wildly different prosperities.

As for Peru, I have walked the streets of Lima extensively”it is a modern and functional city”without having the slightest feeling of moving among dolts.

Now: If a genetic group has never produced evidence of intellectual capacity, one might reasonably suspect that it doesn”t have any. You might be wrong, but you might be right. Once the said group has produced too much talent at too high a frequency to be attributed to long-shot, fourth-standard-deviation chance, genetic explanations for a former lack of national prosperity cease to work.

I am not sure that we are not about to be surprised by a lot of Latin America. I note that one of the world’s top aircraft manufacturers is Embraer of Brazil. When I fly United from Mexico to the States, it is aboard an Embraer 145. The IQist explanation is that Embraer’s engineers are all of the white elite, or, so help me, that “only the smartest Brazilians work for Embraer.” This latter suggests that Airbus and Boeing use ordinary citizens, perhaps recruited from a bus station.

Ridiculous Latin-American craft, of clay and wattles made, probably in the rain forest, doubtless with an abacus. Note logo on tail.

Are Embraer’s engineers white? Maybe. I don”t have mug shots. Nor do I know just how the rapid economic progress in Brazil is affecting the makeup of the professions. Yet I wonder whether there is not such a thing as getting too comfortable. Those airliners are not toys. US airlines buy them.

Maybe race realists need to be more realistic about race. How many exceptions make a norm? It takes very few Deysi Coris to wreck a perfectly good theory.