Revenge of the RINOs 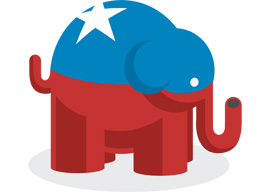 This isn”t the first challenge to Norquist’s pledge. During the primary campaign Jon Huntsman also repudiated the attempted policy hijack and went on to suggest that perhaps science wasn”t necessarily all bad and that it was OK to cooperate with a Democrat once in a while.

If Huntsman’s opinions were shots across the bow, Jeb Bush is aiming broadside, and some suspect that a schism awaits. What would that mean for the future of the Republican Party? Will there even be a Republican Party?

The GOP will survive, but it won”t be the one recognized by the ultra-conservative fringe that has successfully hijacked the Republican narrative. What these pundits and power-grabbers won”t admit is that they aren”t real Republicans at all. They arrived, full of noise and sophistry, late to the Party. These hijackers didn”t merely claim the Republican mantle; they yanked it from the shoulders of those more deserving, then clothed themselves in the righteousness and hyperbole of men such as Grover Norquist.

Republicans”real Republicans, conservatives in the mold of Eisenhower and Ford and with the voices of Buckley, Jr. and the post-civil-rights James Kilpatrick”have always sought to promote conservative ideals without the taint of dogma.

Ronald Reagan’s famous “Eleventh Commandment” exhorting Republicans never to attack each other was tossed curbside during this year’s primary season.

As the campaign slogged on it became apparent to many that the Republican Party was not the monolithic belief system that many thought it was, as evidenced by the far right’s habit of dubbing many members of the not-so-far right as mere RINOs”Republicans in Name Only. Some of these newly minted RINOs included traditionally conservative Republicans such as Timothy Johnson of Illinois and Senator Lindsey Graham of South Carolina. They, along with the highly visible Jeb Bush, have dared to speak out against Norquist and his pledge. They question whether or not men such as Norquist”and the pundits who amplify his message”should drive the Republican agenda.

The result is a window into the Grand Old Party’s reemerging narrative, one where the extremists driving today’s agenda will likely become less influential and in which a broadly defined conservative agenda welcomes debate again.