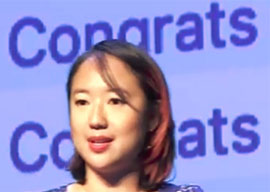 And she is hardly alone in her boundless sense of entitled resentment. She is part of a rising breed of Asian progressives who are being openly encouraged to snort disdainfully at the white proles whom they consider intellectually and morally beneath them.

In 2014 a similarly ungrateful Korean American gal named Suey Park made a brief splash when she tried to get Stephen Colbert canceled after he made a lighthearted joke that didn’t mock Asians but rather white Americans who didn’t understand Asians, but to Park, his head had to roll anyway. In Park’s own words:

I’m talking about whiteness at large….I always paint my white characters to be singular, to be ignorant….I don’t want them on our side…This is not reform, this is revolution….Whiteness will always be the enemy.

Thanks for letting us know, dog-breath!

Last year a Yale University dean named June Chu was temporarily placed on leave after it was revealed she’d made demeaning comments online about “white trash” and “sketchy…low-class folks” she had to suffer while bouncing around town:

Remember: I am Asian….I know Mochi. These are not good and overpriced….I guess if you were a white person who has no clue what Mochi is, this would be fine for you.”

To put it quite simply: If you are white trash, this is the perfect night out for you. This establishment is definitely not authentic by any stretch of any imagination and perfect for those low-class folks who believe this is a real night out.

Writing in defense of Sarah Jeong for Slate, Inkoo Kang, another Woman of Yellowness who appears to have been spat into this world in a state of advanced homeliness and sees nothing racist about expressing “Korean American pride” but views “white pride” as moral cancer, says that Jeong isn’t the “real racist” in this equation, it’s the head-hunters and “pitchfork wielders” of the alt-right who dared to take note of her comments.

It has been my observation that part of the general Asian temperament is a tendency toward conformity and fanaticism. Remember, this is the continent that gave us Unit 731 and the Great Leap Forward and the Khmer Rouge. It has also been my personal experience that when Asians hop on the social-justice train, they are by FAR the most fanatically anti-white group of all.

We would be wise to heed the rise of the Social Justice Dragon Lady. Not only does she hate us, she is being rewarded for doing so.