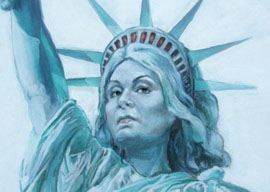 Roseanne’s boring bitterness about being a misunderstood visionary martyr was never more palpable than in her 2011 name-naming article in New York magazine, which could have been titled “Look Back in Anger.”

According to Barr, bigoted network bigwigs were hell-bent on grasping control of (and thereby ruining) her Top 10 series because they resented working with a smart, stubborn, working-class female. Or something.

When the show went to No. 1 in December 1988, ABC sent a chocolate “1″ to congratulate me. Guess they figured that would keep the fat lady happy”or maybe they thought I hadn”t heard (along with the world) that male stars with No. 1 shows were given Bentleys and Porsches. So me and George Clooney [who played Roseanne Conner’s boss for the first season] took my chocolate prize outside, where I snapped a picture of him hitting it with a baseball bat. I sent that to ABC.

It’s easy to imagine any number of successful media women relating that “chocolate” anecdote with a sanguine “…and look at me now!” smile. Not Barr. Roseanne was always acutely observant, hardworking (to put it mildly), and overflowing with raw talent. But self-deprecating she isn”t. True, she exhibited a smidgen of self-awareness when she called her recent reality TV show Roseanne’s Nuts, but tellingly, the show was a miserable failure.

Barr is also averse to sharing credit for her sitcom’s success with the one person who deserves it most. Many viewers tuned in every week because her TV husband, John Goodman, was a (literally) massive crush object for straight women and gay men. Many people watched Roseanne in spite of, not because of, its creator. This may help explain her many unhinged “look at me!” outbursts.

Remember her obnoxious “singing” of the “Star-Spangled Banner”? Or (Jewish) Roseanne’s photo spread in (Jewish) magazine Heeb, dressed as Hitler and pulling a pan of “burnt Jew cookies” out of the oven?

In these and other instances, Roseanne’s post-disaster response is inevitably, “Jeez, can”t ya take a joke?” Except normal humans can”t detect the “joke” hidden within these obtuse gestures. That’s bad news if you”re a professional comic.

Except now Roseanne is a professional politician, too. She’s running for president on the Green ticket. Alas, her fellow party members are the latest folks who can”t appreciate Barr’s sheer wonderfulness.

In that interview, Barr also makes the startling claim that her new NBC sitcom, Downwardly Mobile, was initially shelved because her politics are too”wait for it”left-wing for Hollywood.

Roseanne complains a great deal about the way women are supposedly treated in Hollywood. But women everywhere would be accorded more respect if they did the one thing that would immediately improve the situation”the one thing they are also most reluctant to do:

Keep their hormonal, neurotic, fit-throwing craziness locked the hell up, at least from 9 to 5.

If Barr humbled herself to do just that, maybe she”d finally be a worthwhile role model.