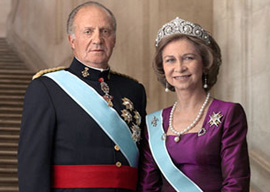 Unfortunately the arrogant prince hasn”t had much luck and is a ridiculous figure in European social circles. Not least because he also happens to be the ex-boyfriend of Tinsley Mortimer“you remember her, don”t you? He appeared briefly on her reality show High Society and was made a fool by Tinsley’s mother Dale Mercer, who called him a Nazi. Now Tinsley is with another prince, only this one is Italian, perhaps a fascist, and has appeared on The Bachelor. A note to Tinsley: Borghese’s mother is American. His paternal grandmother, a Sicilian who married into the family, founded the famous cosmetics line. The blue blood runs thin through Lorenzo’s veins and one can certainly tell since he has willingly appeared on reality television. But perhaps like Corinna, Tinsley’s dream will come true, she will become a princess, and her entree into the beau monde will be secured. Never mind the details!

But back to the Bourbons, who have not had a great year. In addition to the hunting accident, Juan Carlos’s son-in-law has been accused of embezzling public funds and now there have been minor rumblings implicating the King. His approval rating is not at its peak. He has been forced to apologize for the Botswana fiasco and has suffered more humiliations in the press as a result of his African holiday. Furthermore, he and his wife did not celebrate their 50th wedding anniversary. We can only speculate why”maybe because any celebration would be an unwelcome display of spending during austere times, and more importantly because everybody knows there is nothing to celebrate. The King and Queen have been leading separate lives.

Hopefully Queen Sofia’s spirits will be lifted by celebrating the forthcoming Diamond Jubilee of her cousin, the Queen of England. England is going to be a madhouse over the next few weeks with royal concerts, flotillas, and events all over the country. I can”t wait.