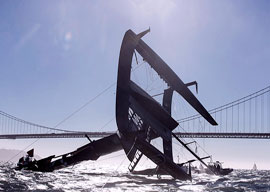 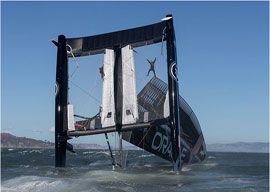 The result turned the sailing world upside down. Connor duly won the Cup back”not for New York, but San Diego? Once there, the East Coast had to bite the bullet and join the Left Coast in defending it against all comers, the first of whom soon appeared out of the antipodes, lawyered up and demanding the right to race on the grandiose scale of yore. Up from Down Under came the mighty Kiwi mega-scow New Zealand with 90 feet of waterline and a deck big as a cricket pitch. Unable to field a “like vessel” in the six months dictated by the century-old “deed of gift” governing Cup races, San Diego countered with a catamaran.

Stars and Stripes was not your average Hobie, but a sixty-foot carbon-fiber hot rod with a 104-foot-high rigid wing sail that looked like a pterodactyl on steroids. This drove the boat so seriously fast”well over twice wind speed (trust me”I crewed in the shakedown), that she showed an alarming tendency to come out of the water like a flying fish if the wind popped beyond a breeze.

But while those of us who lobbied for more speed had gotten more than we bargained for, nobody actually died. Not this time around”being airborne is now part of the professional game, and when the boats racing in San Francisco lose control, they come crashing down on the water. The first death came in the Luis Vuitton challenger trials earlier in the summer, when Sweden’s Artemis cartwheeled over her hundred-foot-high wing mast, fatally slamming Olympic sailor Andy Simpson into San Francisco Bay. These are boats in name only, skidding along on toothpick hydrofoils with 97% of their mass so far above the waterline that not even Ellison likes to think about it. If you took one out into the open sea through the Golden Gate you wouldn”t likely be coming back.

There is always business in great waters, but the irony is that having won the legendary yachting trophy back from Switzerland at astronomical cost with an even scarier extreme trimaran, Larry Ellison has become not only an exile from his own sport, but a man who has alienated an American icon. Ablaze with advertising, the fleet of terrifying water striders he’s unleashed may look oddly at home in the shadow of Alcatraz, but nobody ever sailed one into the sunset or up to a dock to hit the town after a week at sea.

Lord knows I tried to get another vintage AC vet to cover the proceedings live, but he pronounced it too boring to bother, though I expect he too will check his TV, for the onboard cameras should make for cracking action. This time around, let’s pay homage to New York and Newport’s heroic investment of blood, sweat, tears, and champagne by rooting for New Zealand, because nothing beats crossing an ocean to race against people who know how to lose the America’s Cup. After all, that’s how we won it in the first place.