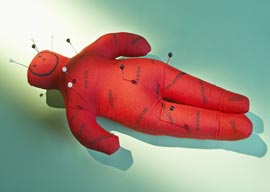 I was Stephanie Guthrie’s age once, of course”the same age as so many rabid, seemingly tireless SJW females. (I even wore those glasses…)

And back then, in the 1980s, when watching the explicit antiporn documentary This Is Not a Love Story, or reading this Margaret Atwood poem, or seeing reports on the Montreal Massacre or of the crimes of Gary M. Heidnik, I”d experience a visceral admixture of cold-sweat panic, impotent fury”and, well, shame, or at least something so like it that there’s probably a weird-sounding word for it in another, more nuanced, language.

Today, confronted by similar news stories, or the rape scene in a Hollywood movie, I may flinch, but the sensations are nowhere near as powerful as those I experienced in my 20s. Back when, recall, computers were glorified, oatmeal-colored paperweights and the Internet, embryonic.

What if Guthrie and her ilk, armed with low-cost easy-to-use tools previously unavailable, are unconsciously practicing a kind of expiatory shame jujitsu?

I”ve already compared the SJW impulse to anorexia. Note the shared thirst for superiority and control (exhibit A: Stephanie Guthrie’s Twitter handle is @AmIRightFolks); the fetishization of noncorporeal vagaries, be they calories or previously unknown species of sexual expression; the addictive mood-altering through the compulsive, self-satisfied employment of insider jargon and gnostic “knowledge.”

But that impulse also reminds me of another, less talked-about, feature of female adolescence:

The widespread attraction to witchcraft.

As I await the judge’s decision in the #TorontoTwitterTrial, I”m shaken to the core at what it might mean for what’s left of freedom of speech on the Internet. I”m rooting with all my strength for Gregory Alan Elliott.

But I”d be lying if I pretended not to intuit what may be behind the twisted thrill Stephanie Guthrie is experiencing from bending a man, a justice system, and possibly the World Wide Web itself to her will.