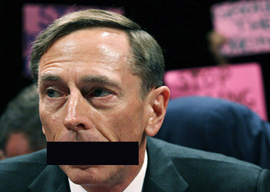 It’s obvious that someone was out to silence Petraeus. Who could believe the government version of all this? The same government that wants us to believe that FBI agents innocently and accidentally discovered the Petraeus/Broadwell affair a few months ago and confronted Petraeus with his emails a few weeks ago is a cauldron of petty jealousies. From the time of its creation in 1947, the CIA has been a bitter rival of the FBI. The two agencies are both equipped with lethal force, they both often operate outside the law, and they are each seriously potent entities. Their rivalry was tempered by federal laws that until 2001 kept the CIA from operating in the U.S. and the FBI from operating outside the U.S.

In one of his many overreactions to the events of 9/11, however, President George W. Bush changed all that with an ill-conceived executive order that unlawfully unleashed the CIA inside the U.S. and the FBI into foreign countries. Rather than facilitating a cooperative spirit in defense of individual freedom and national security, this reignited their rivalry. FBI agents, for example, publicly exposed CIA agents whom they caught torturing detainees at Gitmo, and Bush was forced to restrain the CIA.

Isn’t it odd that FBI agents would be reading the emails of the CIA director to his mistress and that the director of the FBI, who briefs the president weekly, did not make the president aware of this? The FBI could only lawfully spy on Petraeus by the use of a search warrant, and it could only get a search warrant if its agents persuaded a federal judge that Petraeus himself—not his mistress—was involved in criminal behavior under federal law.

The agents also could have bypassed the federal courts and written their own search warrant under the Patriot Act, but only if they could satisfy themselves (a curious and unconstitutional standard) that the general was involved in terror-related activity. Both preconditions for a search warrant are irrelevant and would be absurd in this case.

All this—the FBI spying on the CIA—constitutes the government attacking itself. Anyone who did this when neither federal criminal law nor national security has been implicated and kept the president in the dark has violated about four federal statutes and should be fired and indicted. The general may be a cad and a bad husband, but he has the same constitutional rights as the rest of us.