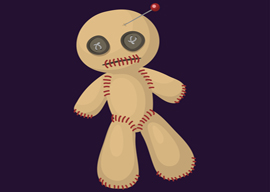 Anti-racism, as it’s practiced by modern leftists, is a massive faith-based superstition. And as anyone who’s ever tried to argue with the superstitious knows, you can”t talk sense to someone in the fevered throes of irrationality. Remember “Niggerhead rock”? Back in the 1980s, the family of former Texas governor Rick Perry leased a parcel of land for hunting. On the land, placed there decades before the Perrys ever arrived, was a rock with the word “Niggerhead” written on it. Perry had the ugly epithet painted over, and he turned the rock upside down. End of story, right? Not so fast. During Perry’s 2011 presidential bid, The New York Times declared that painting over the word was not good enough”the rock should have been destroyed. The word had rendered the rock evil, and only reducing it to gravel would free the land from its spell. Of course, imagine if the stone had been marked with a pentagram, or the words “hail Satan,” and Perry, a Christian, had destroyed it because the words or symbols had made the stone malevolent. He would have been ridiculed as a superstitious fool by the same leftists who proclaimed that the “nigger” rock was possessed by wickedness and in need of physical obliteration.

It should be pointed out that a lot of anti-racism voodoo practitioners are white. A few days ago, as I watched the cop-cam footage of talentless irritant Shia LaBeouf’s drunken meltdown, I thought to myself, here’s a prime example of a leftist voodoo priest who thought his magic had made him immortal. LaBeouf screechingly challenged the cop who arrested him, How dare you arrest me, I”m a white man! I can”t be touched! My take on it is, LaBeouf, a far-left social-justice nutcase, has been preaching about “white privilege” for so long, he’s come to believe it’s a real thing. When his superstitious beliefs were proven wrong by cold hard reality, he couldn”t handle it. LaBeouf didn”t just lose it because he was going to jail; he went batshit because his magic amulet didn”t protect him from persecution the way it was supposed to. Literature is filled with stories of witch doctors who become so convinced that their magic is real, they begin to believe they are protected from all harm. The repulsive little weasel in the back of that cop car is a man suffering a crisis of faith. We also saw this a few months ago after the arrest of SJW crusader “Reality Winner,” who stands accused of stealing classified documents from the NSA. Immediately after being tossed into a cell, Winner told her sister not to worry”her privilege as a pretty white woman would soon get her released.

It didn”t. As with the villain at the end of Polanski’s The Ninth Gate, the “magical protection” turned out to be completely illusory.

Is there a cure for those who believe in “racisms”? Well, logic hasn”t worked. Perhaps some enterprising SJW will launch an exorcism service to cleanse people of the racisms that have possessed their body. In the end, there might not be a remedy beyond the one that got that cursed, starving Haitian to start eating again. Drill drill, poke poke, snip snip, and voilÃ , welcome to a world in which you will no longer fear being haunted by racism jumbees.

A radical approach, to be sure, and one that would leave Salon.com permanently devoid of writers. But I”ve yet to hear a better idea.