Some Dead Bodies Are More Equal Than Others 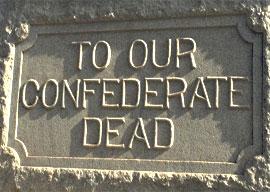 They tell unreconstructed Southerners to quit whining and shut the hell up about their Lost Cause, but they’d never dare say the same thing to a so-called Native American.

“But that war was so long ago.” Yeah, so was slavery.

If all of America’s wealth and power had been built on black slavery, the South would have easily won the war. Instead, they were outmanned, outgunned, and outspent. The Union didn’t win because their cause was more righteous”they won because they had the guns and the money and the human cannon fodder to spare.

You never hear of Union soldiers raping slave women or of the North economically raping the South for at least a century after the war ended. You won’t hear about how the vengeful angels of Reconstruction rained down holy hell upon average Southern whites.

In their effort to enshrine and sanctify one group’s history, they feel compelled to dismiss and erase another group’s history”all in the delusional, quixotic quest to enforce some dim notion of “tolerance” that serves as a convenient mask to cloak a naked drive for power.

In order to properly remember those nine, we must wipe away all traces of those 300,000. The message is coming through as loud as a Rebel yell: White Southern lives don’t matter.

So much of history is about who gets forgotten in the retelling. The winners not only get to write the history books”they get to keep rewriting them until the losers cease to exist. Just like war, history is a zero-sum game. You either write it, or you get written out of it.