Something’s Rotten in the Republic 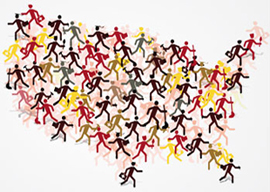 They never did. Not a peep. Nor did any of the dozens of comments on the comment thread mention it. I suppose CBS monitors those comments closely. Wouldn’t want anyone raising controversial topics on a major TV network’s website. Good heavens, no!

Item: At least one US government agency is willing to break the law to ensure that Somali goatherds, Iraqi daughter-killers, and Uzbek terrorists keep flowing into our towns. The agency is the Office of Refugee Resettlement, demon spawn of the US Department of Health and Human Services. The law is Title IV, Chapter 2, Section 413 of the Immigration and Nationalities Act, which requires that Congress shall receive “report on activities under this chapter…not later than the January 31 following the end of each fiscal year.”

As Ann Corcoran notes, the administration is now running three years late with these reports. Gosh, you might almost think there’s something they don’t want you to know about refugee resettlement, mightn’t you? Such as, oh, that the whole shebang is fraud-addled and that genuine refugees are a tiny minority of those resettled. Or that refugees are dumped on the welfare system ASAP and mostly stay there while fat-cat executives of the “nonprofit” agencies running the scam purchase gold-plated Jacuzzis with their high-six-figure salaries.

Item: A February 19 Associated Press report carries the headline: “Immigrants trickling back to Ala despite crackdown”:

Ana Jimenez and her husband were so terrified of being sent back to their native Mexico when Alabama’s tough crackdown on illegal immigrants took effect that they fled more than 2,000 miles to Los Angeles, cramming into a two-bedroom apartment with more than 20 other relatives.

Now they are among the families coming back to cities like Birmingham, as the mass deportations never materialized and courts blocked parts of the law.

(I added the Birmingham link. Lotsa luck there, Ana! The whole thing is written in this triumphalist tone: Righteous people who’d been wronged are heroically asserting their humanity in the face of cruel oppression. Sound the trumpets!)

These are illegal immigrants the Associated Press is writing about: trespassers, scofflaws, job thieves, and future (or present if they get sick) welfare-state clients. And they are deemed worthy to receive benefits from a common fund into which neither they nor any of their forebears paid a single red cent.

Some initially feared the law would mean that people would be rounded up…said Ferreti, an anthropologist from the University of Texas who is living in Tuscaloosa, about 60 miles southwest of Birmingham, for her studies. “That has not happened….”

What a pity. What a damn pity.