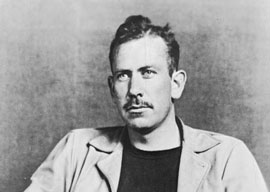 Oh, and the Joads” “trek to California … reads as though it takes weeks, if not months,” Allen scoffs, “even though Route 66 was a state-of-the-art highway for its time and the journey could be easily accomplished in from three to six days.”

If only Steinbeck had lived long enough to see the descendants of the flesh and blood Okies”whom he”d hopefully cast as a Marxist worker’s vanguard”vote Ronald Reagan into office, twice.

In short, “Steinbeck was the Woody Guthrie of fiction,” Allen told me via Facebook, adding that “real-life Okies had never heard of Woody Guthrie.” Steinbeck’s “realist” proletarian novel was, and is, a bigger hit with the East Coast Marxists for whom it had really been written.

Dust bowl mendacity extended beyond Steinbeck, by the way. The supposedly skint federal government paid photographer Dorothea Lange to capture the “Okie” migration on film. (Instead of, oh, I dunno, doling out those dollars directly to her shabby subjects?)

I do not remember how I explained my presence or my camera to her, but I do remember she asked me no questions. … She had just sold the tires from her car to buy food. There she sat in that lean-to tent with her children huddled around her, and seemed to know that my pictures might help her, and so she helped me. There was a sort of equality about it.

There’s no way we sold our tires, because we didn”t have any to sell.

I wish she [Lange] hadn”t taken my picture. I can”t get a penny out of it. She didn”t ask my name. She said she wouldn”t sell the pictures. She said she”d send me a copy. She never did.