Sucking all the Fun out of Halloween 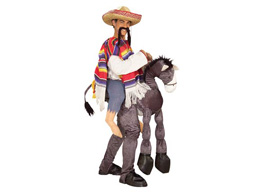 Not to be outdone or muscled out of the spotlight, angry feminists—pardon the redundancy—are wailing and gnashing their wolverine teeth about “slutty” costumes that objectify and sexualize women, as if having vaginas and self-identifying as “women” didn’t “sexualize” them in the first place. A writer for the charmingly titled Bitch magazine mixes anti-racism and anti-sexism into one big nauseating Dairy Queen Blizzard in an imbecilic screed that seems to imply that dressing as a “sexy squaw” forces Injun men to rape their women at astronomical rates. There is also righteous howling about a costume called “Anna Rexia” that makes sport of eating disorders and one called “Anita Sedative” that dares to imply that some women might be a little bit crazy.

The homos, bless their pink little candy Valentine hearts, haven’t been nearly so vocal as other grievance groups this Halloween, although there was a minor kerfluffle about a “Men’s Gay Costume Wig” that activists were able to shame the vendor into renaming a “Men’s 70’s Adult Star Costume Wig.”

The keening outrage is all so predictable, I fear my head might explode from yawning so hard. Thankfully, it reached what is perhaps an insurmountable pinnacle in 2004, when a school district in Washington State banned Halloween celebrations because witch costumes might offend the religious sensibilities of Wiccans.

What’s next—the abolition of jack-o-lanterns for being insensitive to men named Jack?

Celtic blood courses through my veins, but you won’t hear me bitching, whining, and writhing in fabricated pain about these non-Celtic ingrates’ bastardized appropriation and arrogant redefinition of Samhain. Is it too much to expect reciprocal courtesy and tolerance?

Back in the 1940s my mother and aunt dressed in blackface for Halloween, but I can’t recall them ever doing anything that caused a black person to suffer.

In the late 1960s when I was a kid—back when neighbors knew one another’s names and you could go door-to-door for only two blocks and come back with two pillowcases stuffed to the brim with candy—I dressed as Aunt Jemima and a “hippie” character in consecutive years. As mom smudged burnt cork on my face for the Aunt Jemima costume, I don’t recall harboring any sadistic or murderous ill will toward black people—for me, the humor came from the incongruity of a six-year-old white boy dressing as what was, before Oprah, the world’s most famous black woman.

The next year, my hippie costume consisted of flared pants, a paisley shirt, round sunglasses, a curly wig, and a “beard” fashioned of freeze-dried coffee crystals sprinkled atop a layer of smeared Vaseline. I still remember the sting I felt when I asked my mother what she’d do if I came home from school one day actually dressed like a hippie.

I don’t feel she would have been as harsh and unforgiving if Aunt Jemima had come a-knocking.