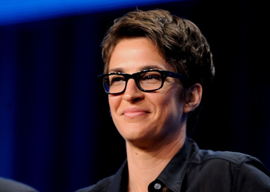 Rich people love to sue, and even so-called cool guys such as old mega-millionaire Howard Stern sometimes come down with a nasty case of the Sue Flu. Stern tried to sue Sirius Radio recently for failure to pay $330 million in stock awards. Fortunately a judge threw out the case. Howard just lost a few notches with me. Come on, buddy, you”re turning into a greedy son of a bitch. How much does one man need?

At least $50 million, according to Bradlee Dean, who is suing Rachel Maddow for defamation. A radio preacher and heavy-metal rocker, Dean says Maddow champions “leftist, socialist, activist “gay rights,” pro-choice, pro government and anti-religious” ideas. Dean says his words were taken out of context and he was made to sound as if he was calling for the extermination of homosexuals. Maddow and NBC Universal are furious and have filed an anti-SLAPP motion against Dean. Clearly some in the media love to edit sound bites, often deceptively, to make them seem more incendiary. Maddow should be ashamed of himself herself. Dean should, too. Why dignify the PC Police’s bullying tactics with any response at all?

When in doubt, apologize and delete, as Lesley Arfin had to do. Not! A writer on the new HBO show Girls, Arfin was being ironic when she complained there was no one like her in the movie Precious after someone noted that Girls had no major characters “of color” in the first episode. She had also once told a joke about “taking Obama to the White House,” a reference to taking a crap. Arfin took some heat from Gawker, those high and mighty”and nearly all-white!”keyboard warriors of anti-racism for her “racist” sense of humor. My God, please help! What is this world coming to? The problem isn”t that we live among so many racists but that almost anything funny that points out differences between people”and they can”t really be “diverse” without being different, can they?”is considered “racism.”

Let’s forget about “racism” and focus on this freak show. Yeah, the “man” who had a baby is separating from the mother of his kids. These people are freaks, and if you don’t like what I have to say about it, sue me! Life is clearly confusing enough; why add children into the mix? My heart goes out to these little tykes. No innocent person should have to explain such a horror.

RIP Levon Helm and Dick Clark. Hopefully you”ve found greater peace than many of us find in this wild world.