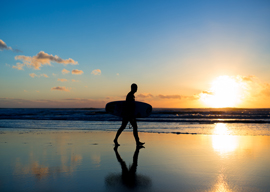 On a multiyear round-the-world surfing trip in the later 1970s, Finnegan found (in his expert opinion) the world’s best wave at an unknown Fiji island, Tavarua.

Finnegan swore to keep Tavarua secret. But the entire island is now a private surfing resort, with accommodations starting at $4,602 per couple per week. Finnegan explains that, as a pro-third-world crusading journalist, he opposed Tavarua’s privatization in principle. Yet, now that he can afford to regularly vacation there, he has to admit that holidaying on your own private luxury island is just as awesome as it sounds.

Ever since Garrett Hardin coined the term “tragedy of the commons” in 1968, privatization has been a widely recommended solution for resource degradation due to overcrowding. Finnegan admits that due to capitalism:

[Tavarua] was the one great wave that did not succumb to the tragedy of the commons.

Surfing is rather like golfing, in that some locales are much, much better than others. Without systems for restricting access, the best ones would quickly succumb to what Finnegan calls “the familiar Malthusian feeding frenzy” where, like Yogi Berra’s former favorite restaurant, the place gets so crowded that nobody goes there anymore.

Naive urban planners are always assuming that golfers can share their vast domains with joggers, dog walkers, and picnickers, but a hard-hit golf ball can put an unwary outsider’s eye out. Similarly, surfers with their hard boards and high speeds can’t share a stretch of beach with children splashing in the waves.

Surfboards are potentially fatal to others, so only one surfer at a time can ride a breaking wave. Hence, surfers are constantly looking for new uncrowded waves, while devising anti-inclusionary “locals only” customs to keep outsiders away from their home surf.

Property rights in waves, however, aren’t as well-developed in law; in practice, therefore, they tend to be determined by custom, backed up by fists, slashed tires, thrown rocks, and the like.

For example, in wealthy Palos Verdes near Los Angeles, the Lunada Bay Boys surf gang recently got in trouble, after a couple of generations of hassling outsiders, for having built a stone fort on the beach to control access to its waves.

Finnegan downplays the locals-only violence, but emphasizes how respectable surfers like himself follow strict codes of secrecy. For example, when surf magazines publish photo spreads of newly discovered breaks, they traditionally will keep confidential even which ocean the wave is in. To learn about where the uncrowded waves are, you have to know the right people.

Amusingly, the only surf spot Finnegan has found with welcoming locals is the New York City area, where surfers are so rare that they are mellow about newcomers.

Interestingly, Elinor Ostrom became the first woman to win the quasi–Nobel prize in economics for her work on how similar marine resources such as fisheries can avoid the “tragedy of the commons”:

Prior to Ostrom, many economists believed the commons could be solved only through privatization or top-down state control. In her 1990 book ‘Governing the Commons,’ Ostrom found examples of a third way: self-organized enterprises—groups of fishers, farmers, or ranchers—who voluntarily organized themselves….

Of course, localism doesn’t fit well with the reigning globalist morality of our times. Ostrom’s research showed that ethnic diversity—which is constantly celebrated as our most valuable possession—turns out to be bad for cooperation in intelligently sharing a natural resource.

Ironically, coastal parts of the United States have been moving steadily to the left politically as their real estate values have appreciated. Initially, progressivism had meant environmentalism, which provided affluent beach communities with a rationalization for keeping away outsiders.

But in recent years, liberalism is starting to mean immigration (and thus overpopulation) über alles. Therefore, leftist beach towns’ traditional efforts to use environmentalism to keep the waves uncrowded are increasingly seen as straight-white-male conspiracies…which, as a close reading of Barbarian Days suggests, they more or less are.