Ta-Nehisi Coates: “All Is Fog” 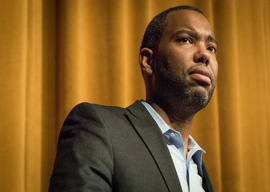 Paradoxically, Coates’ forgetfulness has convinced many of his fans that he is an authoritative historian. We live in an age of increasing antiquarianism in which the more historically remote the alleged cause, the more plausible it sounds to moderns. Coates’ inability to recollect much about recent decades provides his politically correct interpretations of the distant past with an infectious confidence.

In his 30s, he discovered that, due to his having largely spent his life in a mental fog, while he was inept at the meat and potatoes of journalism—explaining how the present ties to the recent past—he could be a huge success as an antiquarian who lectures people on how the far past controls the present. Coates’ knack for forgetting recent history is especially well paid because there have been all these embarrassing events during the past half century that would undermine his cherished assertion that all the troubles of “black bodies” today are the fault of “people who think they are white.”

Indeed, Coates’ career is reminiscent of that of another well-paid autodidact: Glenn Beck.

Because Beck can’t remember anything for long, he’s always wildly excited by whatever book he has just read. It’s all news to him!

This has advantages in promoting theories of historical causality. For example, Beck has been influential in calling attention to the Frankfurt School of German-speaking “Cultural Marxist” highbrows who were subsidized by the U.S. government during the 1940s.

That has some value. Yet, if you actually know more intellectual history than Beck does, it’s hard to be quite so confident when pondering the purported centrality of the Frankfurt School. Granted, Marcuse was a clever promoter who in old age surfed the wave of ’60s sex, drugs, and rock & roll intellectualizing at California colleges. (The Coen brothers amusingly wrote Marcuse into a cell of Malibu Marxists out to subvert Hollywood in Hail, Caesar!)

Adorno, on the other hand, was a stick-in-the-mud snob who hated guitar music and, indeed, any music less austere than Schoenberg’s twelve-tone experimentalism. So it’s hard to be sure how direct was the connection between the Frankfurt School and the post-1968 left.

These are not, however, the kind of reality checks that occur to Beck to bother with.

Similarly, Coates’ extremely hazy conception of the events of the past fifty years, when liberals have largely been in charge of everything race-related, has helped make him vastly popular with liberal whites looking for reasons to blame conservative whites for blacks continuing to screw up.

For example, Coates is much appreciated for his assertion that the reason blacks in 2017 have on average saved so little wealth has nothing to do with what has been happening over the past half century since the civil rights revolution, but instead is the direct result of the FDR administration’s redlining in the 1930s.

This doesn’t make much sense, but few care. White liberal gentrifiers want rationalizations for why blacks should be driven out of potentially valuable inner-city properties and foisted upon suburbs and small towns. To them, Coates’ redlining theory is a license to print money.

Why have blacks failed to build much wealth? Well, African-Americans tend to be the poorest Americans but the richest Africans.

But that kind of subversive insight would never dawn upon Coates, which is one reason he’s made millions.