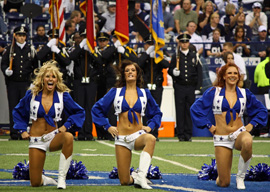 There’s been too much police brutali—

Wait a minute, is taking a knee about police brutality?

Why did Colin Kaepernick say he was taking a knee? Somebody look that up.

Okay, taking a knee is an anti-Trump thing, right?

Wait a minute, if it’s an anti-Trump thing, then Colin Kaepernick did it when Obama was president, so it would have been an anti-Obama thing. That can’t be right.

Okay, taking a knee means you’re pro–free speech, it’s to support people’s right to take a knee even if Trump says nobody should take a knee.

Or is it just to support Colin Kaepernick’s right to take a knee?

Colin Kaepernick doesn’t even play football anymore, he’s just the king of knee-taking because he did it first. So that’s not it.

By the way, “take a knee” in football used to mean “run out the clock.” We really need some other term.

Maybe taking a knee is an attempt to support Colin Kaepernick in his attempts to get back into football because racist owners are refusing to hire him.

Of course, if you’re a 49ers fan, you might take a knee to protest that game last year when Colin Kaepernick threw for a measly four yards against the Bears.

“I would actually take a knee to protest the fact that ‘The Star-Spangled Banner’ is such a mediocre anthem to begin with.”

What happens if you’re a season-ticket holder at, say, MetLife Stadium and you wanna take a knee? Even if you fold the seat up and put your knee down on the concrete, you’re probably gonna have trouble squeezing down into that space and then what’s the point, you disappear if anybody around you is standing up.

Come to think of it, why don’t they ever show people in the stands taking a knee? Is it only players who take knees?

And why were players taking knees at Wembley Stadium in London? Isn’t the whole point of playing games in London to get the British to start enjoying North American football? They show up for the game and there’s this knee thing going on. And they probably wonder why they have to listen to the American anthem in the first place. It’s the ultimate “I don’t have a dog in this fight” situation.

And it wasn’t just any players, it was the Baltimore Ravens. “The Star-Spangled Banner” was written for the flag that was flying over Fort McHenry, which is in Baltimore! It’s their hometown song. And actually, come to think of it, the reason we celebrate that flag from Fort McHenry is that the British had been shelling the hell out of the fort all night in the War of 1812, which was the crappy war in which they burned down the White House. We’re kinda rubbing it in their face to sing the song at all in London.

Then those same Baltimore Ravens stood up for “God Save the Queen,” which was probably confusing to some of them because it’s the same melody as “My Country, ’Tis of Thee,” so there was a disorienting moment of take a knee/don’t take a knee, plus now it looks like the only reason you’re standing up is to honor the Queen, which is not right since we fought a war to get rid of the English monarch and, besides, this was our one chance to take a knee against our own monarch since George III ruled over us prior to the invention of the game of football, so dissing his family would have been a great delayed payoff in the same way that we dismantle Confederate statues after they sit there for 130 years.

Before I take my knee, though, I want to know if I’m choosing the wrong bodily gesture, since many of the NFL players on Sunday were holding hands, linking arms, and engaging in other forms of group semaphore, the meaning of which is mysterious to me. The Pittsburgh Steelers stayed out of the stadium until “The Star-Spangled Banner” was over—well, except for Alejandro Villanueva, the West Point grad who was an Army Ranger for three tours in Afghanistan; he stood on the field by himself and later apologized for not being a team player. But the Steelers gesture seems like a “cat ate my homework” ploy. “Oh, sorry, we didn’t get here in time for the national anthem.” I’m calling unsportsmanlike conduct on that one. You can’t avoid taking a knee by not making your knee available.

I would actually take a knee to protest the fact that “The Star-Spangled Banner” is such a mediocre anthem to begin with, and I’m sure most singers who have tried to do it in football stadiums would agree with me, because you always start out too high and then when you get to that high F at the end you have to either cheat or make a fool of yourself. I mean, the high F is great for anybody who has Whitney Houston pipes, because everybody gets goose bumps when you hit it, but Francis Scott Key was a sadist.

But then that brings up the question of what to do if the person who’s actually singing “The Star-Spangled Banner” wants to take a knee. This is especially hard for women since they’re already trying to walk across deep grass in high heels, and getting up and down from the take-a-knee position would be awkward and potentially embarrassing, while the only alternative—getting down on both knees—would be reminiscent of Al Jolson in blackface singing “Mammy” and so obviously inappropriate under the circumstances, assuming that the gesture has something to do with Black Lives Matter in the first place—and I’m still not totally sure that it does.