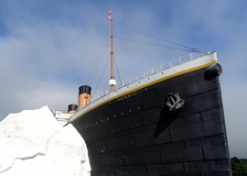 Hollywood has done very well out of the tragedy. The 1958 A Night to Remember, starring Clifton Webb and Barbara Stanwyck, is my favorite, and the Winslet Titanic is also good, but total bullshit. Even eyewitnesses watching the great ship go down differed in their accounts. Some said it groaned and split in half, others saw the lights go out as it slid silently under. Mythmaking and fake news were the order of the day. There was money to be made, and all sorts of wild rumors became news and absolute eyewitness truths. Today The New York Times would have blamed Donald Trump for the sinking, as would The Washington Post. Not to mention CNN. But please don’t ask me how they would manage this one more Big Lie. I write for respectable publications.

The reality of the disaster was quickly erased by myths invented by those who could profit from the fake news they were spreading. Replace November 2016 with April 1912 and you get the picture. White Star reported that Captain Smith was last seen handing a baby to its mother in her lifeboat. In the Nazi Titanic movie a Jewish passenger starts a riot. (That’s where the joke that a Jew called Iceberg caused the sinking comes from.) The exhibition runs until January 2019. All I can say is had I been on board, I don’t know what I would have done. Male survivors of the Titanic disaster were seen back then as the males of today who whistle at girls and even subtly goose them in crowded elevators. On second thought, I would have had a stiff drink in the first-class lounge and gone down with the ship.