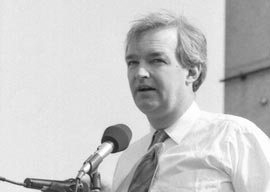 It was different during the Thatcher era, when three decades worth of neo-liberal discussion suddenly found their executor. Maggie would probably have agreed with Zoe that

“When there is a broad perception of realism that you don”t like, you can”t just argue against it: you have to build a new realism.”

Those on Zoe’s side of the barricades have advantages over those of us on this side. They are infinitely less individualistic – it is impossible to imagine a rightwing meeting where everyone is encouraged to have their say (or that is as boring as the meetings she describes). The right doesn”t do solidarity. And leftists cannot separate the personal from the political. Robert McAlpine again: “The only thing that matters is everything you do.” This makes them fanatical, tiresome – and effective.

Taki’s Magazine readers will doubt Williams” assertion that modern Britain is rightwing in any meaningful sense – to her, Starbucks is dangerous – and they would be correct. Modern Britain has certainly been shaped by neo-liberalism – but it has been at least equally shaped by egalitarianism, internationalism and political correctness. Zoe could have stayed at home.

Far from being revolutionaries, today’s leftists are adding to an existing structure, aided by previous leftists. People like Jon Snow, the 67 year old, perpetually adolescent Channel 4 anchorman – white and middle-class and hating it, identifying emotionally with outgroups, so anxious still to shock that he offensively weaponizes his socks and ties. “My mental age has crept up from 17 to 23,” he says faux-impishly. “In the establishment, I”m the most anti-establishment person I know.” With friends like these in so many helpful places, modern leftists are pushing at a door so far ajar it’s practically off its hinges.