The Right to Bear Nukes 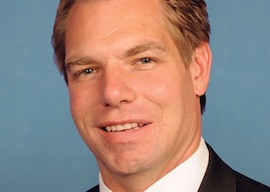 Rep. Eric Swalwell (D-CA) has an annoying habit of reminding people that we don’t live in the 18th century anymore. He seems to think that the Second Amendment was written to protect the right to own muskets, but that the Founding Fathers couldn’t have anticipated the alleged horrors wrought by private ownership of assault weapons.

Strangely, though, he finds hidden somewhere deep within the US Constitution the right for the government to own nuclear weapons in order to terrorize the public into obedience.

Back in May he wrote an OpEd for USA Today urging the US government to “buy back” all assault weapons from private citizens, blithely sidestepping the fact that none of the weapons were bought from the feds in the first place. The piece was titled “Ban assault weapons, buy them back, go after resisters”:

Reinstating the federal assault weapons ban that was in effect from 1994 to 2004 would prohibit manufacture and sales, but it would not affect weapons already possessed….Instead, we should ban possession of military-style semiautomatic assault weapons, we should buy back such weapons from all who choose to abide by the law, and we should criminally prosecute any who choose to defy it by keeping their weapons.

Note his use of the term “resisters” and its implication that the true “resistance” involves people who resist the government disarming them. Contrast this with the idea of a “resistance” that involves resisting legitimate electoral results in the service of globalist overlords who seek a populace of disarmed, medicated, compliant, conformist snitches. And keep in mind that most of the people these days who urge for “resistance” are, unwittingly or otherwise, fighting in the service of abject compliance. US history and they wouldn’t come close to the fatalities caused by a single nuclear bomb.”

“You could combine the deaths from every mass shooting in US history and they wouldn’t come close to the fatalities caused by a single nuclear bomb.”

I hate to have to keep bringing up the fact that alleged “journalists” should never pretend they can read minds, but not as much as I hate the fact that this is essentially what 99% of modern “journalists” do in lieu of forming substantive arguments:

So basically @RepSwalwell wants a war. Because that’s what you would get. You’re outta your fucking mind if you think I’ll give up my rights and give the gov all the power.

Swalwell reminded Biggs that the citizenry, despite the gorillions of assault weapons they allegedly already have, are severely outgunned by the feds:

And it would be a short war my friend. The government has nukes. Too many of them. But they’re legit. I’m sure if we talked we could find common ground to protect our families and communities.

I’m not too sure they would have found “common ground” to discuss how to protect our families and communities from a government that has nukes pointed at them. Biggs responded by doing little more than rephrasing what Swalwell had said:

So our government would nuke its own country in order to take guns? Wow

Swallwell accused Biggs of being a drama queen:

Don’t be so dramatic. You claiming you need a gun to protect yourself against the government is ludicrous. But you seem like a reasonable person. If an assault weapons ban happens, I’m sure you’ll follow law….Don’t be so dramatic. No one is nuking anyone or threatening that. I’m telling you this is not the 18th Century. The argument that you would go to war with your government if an assault weapons ban was in place is ludicrous and inflames the gun debate. Which is what you want.

There it is again: Swalwell tells Biggs what Biggs really wants in response to Biggs telling Swallwell that Swalwell really wants a war. Have you ever noticed that when someone tells someone else online what that person really wants, it’s never anything good? What are the odds, huh? Is there an island to which I could relocate where 99% of argumentation doesn’t consist of unfalsifiable mindreading and fraudulent appeals to motive?

So let’s attempt to disentangle what Swallwell is saying: He says he doesn’t trust ordinary citizens to obey the law when it comes to not going on mass shooting sprees—even thought at least 99.9% of assault-weapons owners never kill anyone—but he trusts them to lie down and offer their pink bellies when the government comes to take their guns away?

What planet does this guy live on? Oh, right—California.

Perhaps realizing he’d just stepped in a big gloppy pool of nuclear waste, Swalwell later backtracked and claimed his “nukes” comment was pure sarcasm, chiding any numskull who thought he was serious:

America’s gun debate in one thread.

1) I propose a buy-back of assault weapons

Great points. I can’t think of anything less tyrannical than threatening to use nuclear weapons against your own citizenry.

You could combine the deaths from every mass shooting in US history and they wouldn’t come close to the fatalities caused by a single nuclear bomb. What were you saying about protecting communities and families and children again?

Yes, the Second Amendment was written in the days of muskets. But I see no mention of nuclear bombs in the Constitution, either, so since the times have changed and this isn’t the 18th century anymore, the government needs to surrender all of the tactical military advantages it has over its citizens.

As I see it, Swalwell’s chief crime here wasn’t arrogance or even a psychotic level of sadism. It was articulating what almost everyone, government employee or not, seems to realize: We are held in perpetual psychological and financial bondage to the biggest gang in town and that any pretenses of democracy are merely window dressing to hide this deeply dehumanizing and humiliating fact.

Beware of anyone who talks about any kind of “resistance” that enables the government’s power rather than resists it.

This clearly isn’t the 18th century anymore. But if the Founding Fathers truly intended the Second Amendment as a deterrent against government tyranny, private citizens should at least have equivalent firepower.

Whenever some government cyborg begins yapping about gun deaths, they never seem to mention gang slayings and suicides and exactly what quotient of the guns used to kill people were owned illegally and the fact that nearly all mass shootings occur in “gun-free” zones.