The Antietam of the Culture War 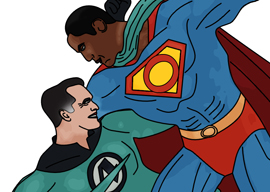 Only six states have approved homosexual marriage, while 30 have imposed a constitutional ban. In North Carolina, a ban not only on same-sex marriage but also civil unions, though opposed by Obama and Bill Clinton, carried on Tuesday with 61 percent of the vote.

Republican turnout in North Carolina’s primary was up half a million, the highest in history. And this is a state Obama carried in 2008, a state whose largest city, Charlotte, will host Obama’s convention.

Even in liberal California in 2008, while John McCain was getting a smaller share of the vote than Barry Goldwater in 1964, Proposition 8, restricting marriage to men and women, won.

How does Obama propose to win this battle?

He has one path to victory—the Supreme Court.

The New York Times, declaring that homosexuals’ right to marry is “too precious and too fragile to be left up to the whim of states and the tearing winds of modern partisan politics,” is looking to the court as the last, best hope to impose same-sex marriage on the nation.

Can’t trust voters, can’t trust elected legislators, can’t trust Congress. Homosexual marriage, says the Times, is too important to be left to democratic decision. The republic must be commanded to accept it by unelected judges who serve for life and against whom the people have no political recourse.

That process of judicial tyranny has begun. A California judge has overturned the decision of California’s voters to ban gay marriage, and his ruling is headed for the high court.

The Supreme Court thus will tell us whether this issue is to be decided democratically by voters and their elected state and federal legislators, or dictatorially by themselves.

But Obama needs one more justice. If elected, he will get it, and same-sex marriage will be forced on all of America. If Romney wins, the Supreme Court will likely leave the issue of same-sex marriage to be decided by the people and their elected representatives.

Thus everything is up for grabs this November: the House, the Senate, the presidency, the Supreme Court and whether we still call the United States of America God’s country.