The Battle of Bollocks 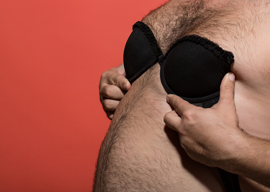 Well, ain’t that somethin’. British feminists are starting to sound like Steven Crowder. There’s even a British feminist group called Fair Play for Women that is single-mindedly dedicated to countering the tranny agenda:

Did I say Steven Crowder:? I shoulda said Roy Moore.

So why is there such strong anti-trans sentiment in leftist socialist “let’s arrest children for hate speech” U.K.? Well, my guess is, the more far-left the nation, the sooner the feminist/tranny war will erupt. The less influence the right has, the more leftists will feel comfortable openly battling each other. Here in the U.S., the left is so united against Trump and his “Nazi” supporters, many leftists are willing to put their own squabbles aside…for now. At the moment, should a conservative criticize a state or county’s “tranny dudes in the ladies’ room” policy, feminists who might, deep down, agree that women’s restrooms should not be open to any swingin’ dirlywanger will probably feel compelled to stay quiet, lest they be seen as being on the same side as “Trump fascists.” Conservatives and rightists in the U.S. still have a voice, and leftists live in fear of inadvertently helping them advance their agenda.

So the feminist/tranny rumble is on hold in the States. Sure, we’ll see the occasional flash…like Rose McGowan versus the tranny heckler. But I don’t predict we’ll see, anytime soon, the kind of bare-knuckle brawling we’re currently witnessing in the U.K.

But make no mistake, the same feelings that are presently being expressed by British feminists will continue to fester among U.S. feminists, too. And every time a leftist woman is told to shut up or face excommunication from feminism as a “transphobe,” every time she’s subjected to the emotional blackmail (the trannies’ favorite tactic) of being told, “You must never criticize us; we have a high suicide rate,” every time a feminist is ordered around by a dude in a wig who claims to be a “sister,” those feelings of resentment will grow.

Feminists and trannies are like Stalin and Hitler. They can, for the sake of mutual convenience, enter into a nonaggression pact. But down the road, war is inevitable, and it’s a glorious prospect for those of us who are quite content to sit back and root against both sides.