The Big Black Elephant in the Room 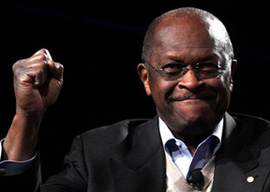 Whereas Obama reserves most of his cultural scorn for his white half, Cain cops an enjoyably disdainful tone toward mainstream black culture in the best tradition of Bill Cosby. He accuses blacks of being “brainwashed” by Democrats, says he “left the Democratic plantation a long time ago,” and asserts that he doesn’t “believe racism in this country today holds anybody back in a big way.”

Most black professionals who make a profession of being black are alarmed, ashamed, and disgusted with Cain. Princeton Professor Cornel West’s huge mule teeth say that Cain needs to “get off the symbolic crack pipe” and admit that racism is still a huge problem in America. Elfin filmmaker Spike Lee Tweeted “NEGRO PLEASE” in response to Cain’s suggestion that Secret Service agents refer to him with the codename CORNBREAD. A caramelly hi-yella who goes by the single name of Touré suggested in TIME magazine that Cain might be the “Most Unctuous Black Man Alive.” Antique singer Harry Belafonte snorted that Cain “knows very little” and is but a “bad apple” in the nation’s Bountiful Basket o’ Blacks.

Amid the mayo-colored pundits who make a living demanding that blacks always have a strong communal racial identity while insisting that whites never have it, Bill Maher called Cain “stupid” while Rachel Maddow laughed. Gaseous MSNBC boar hog Ed Schultz suggested Cain’s existence performs a “disservice to his race” and that The Hermanator is a cunningly insincere shill who is only trying to tell “white Republicans who don’t like black folks…what they want to hear.”

Ed, if you were to die tomorrow, there’s not a black person on Earth who’d cry.

I’ve never been able to peek inside Herman Cain’s heart, so I’ll never know whether he’s motivated by agonized waves of racial self-hatred or whether he simply can’t be bothered to be lectured about precisely how he chooses to be black.

But when it comes to things such as skin color and having grown up in a segregated black environment, Herman Cain is a thousand Southern swamps blacker than Barack Obama.

The reason Cain catches so much hell from the anti-white blacks and the pro-black whites is because he doesn’t think like a black person is expected to think. His critics believe race is entirely a social construct, and despite his tar-colored skin, he simply doesn’t fit their model of what constitutes “black.” He may be black by birth and black by experience, but unlike Obama, he will never be “black” in the head.