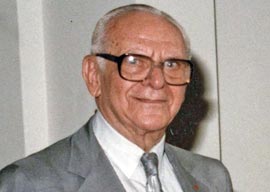 Apparently, only the best informed had been aware before his death in 1990 that Hammer was a scoundrel. Taki wrote in the mid-1980s:

[Hammer] is also a one-man Kremlin financed and Kremlin directed operation designed to advance the Soviet Union’s covert activities within the Free World.

But The Spectator wouldn”t publish that for fear of the litigious Hammer.

Thus Hammer’s perfidy wasn”t widely known. For example, in the early 1980s, one of my family’s oldest friends blithely moved from Chicago to Southern California to work as Oxy Pete’s head of personnel, only to leave quickly. He never wanted to talk much about what he”d witnessed, other than to emphasize that Hammer wasn”t like he seemed on TV.

This reminds me of an ongoing puzzle: Why do billionaires seem to care so much more than the rest of humanity for paintings? The press is full of stories of plutocrats selling each other art for extravagant sums.

The career of Armand Hammer demonstrates that art objects with values assigned almost arbitrarily can be useful in money laundering, tax evasion, and bribery. For example, a 1996 New York Times article entitled “Armand Hammer’s Maze of Skulduggery“ alleged that

when Hammer wanted to bribe Soviet officials involved in the awarding of mineral concessions, he invited them to his gallery in Switzerland and had them pick out a painting to buy for themselves, after which a buyer would materialize offering to repurchase it an inflated price, thus providing them with a windfall profit.

Similarly, Hammer had publicly announced in 1972 that he was donating to the Hermitage Museum in Leningrad a famous Goya painting worth a million dollars. But it was actually an inferior version he”d had his Knoedler gallery (which Hammer had acquired in 1971) buy for $60,000. He then had Knoedler sell it through a cutout to his Hammer Foundation for $160,000, presumably violating IRS rules against self-dealing. He then apparently took the $100,000 profit in cash and gave it to a Soviet cabinet minister.

In 2011, the global art world was rocked when it was discovered that New York’s oldest gallery had, over a decade and a half, sold dozens of modern paintings”including a “Mark Rothko” for $8 million and a “Jackson Pollock” for $17 million (not to mention a “Jackson Pollok“ that the dealership’s president sold to herself for $280,000)”that had actually been forged by a Chinese immigrant in his garage in Queens for a few hundred bucks apiece.

The name of that prestigious art gallery? Knoedler.

Yes, it was the same dealership that fenced the Russian paintings to Mellon in 1930, and had been owned by the Hammer family since 1971. (In case you are wondering, movie star Armie Hammer of The Lone Ranger is Armand’s great-grandson.)

Who would have imagined that a firm owned for decades by Armand Hammer couldn”t be trusted?