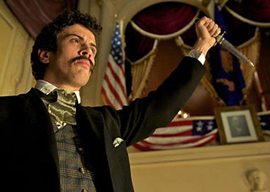 Mrs. Surratt is played by Robin Wright (who was known as Robin Wright Penn until the Recent Unpleasantness with her ex-husband Sean Penn). Wright portrays Surratt as a woman of the steeliest determination and intelligence. It’s an impressive performance that only works to undermine Redford’s contention that an obvious injustice was done to her.

Everyone says history is written by the victors, but it’s actually written by the historiographers. For the first century after 1865, white Southerners wrote most Civil War histories and almost all the accounts of the subsequent Reconstruction. Their anger over the postwar military occupation was transmitted in two vastly popular movies: 1915’s The Birth of a Nation and 1939’s Gone with the Wind. After FDR’s 1932 victory, white Southerners made up a large fraction of the New Deal coalition. Hence, the liberal Democrats who wrote most mid-century history books pandered to the South’s view of Reconstruction as a grave injustice.

Only with the rise of blacks in the late 1960s did Reconstruction come under scrutiny. Redford’s movie, set entirely in Washington, DC in 1865, features only one line spoken by an African-American.

With heavy irony, Redford implies that the true conspirator was not poor Mrs. Surratt but Secretary of War Edwin Stanton (played by the imposing Kevin Kline as a Cheney-Rumsfeld evil authoritarian). In The Conspirator, Stanton railroads through the trial of eight civilians by military judges. (Historically speaking, new President Andrew Johnson, a Tennessee Democrat, seems to have been more convinced of Mrs. Surratt’s guilt than Stanton was.)

Stanton, tireless organizer of the Union war effort, ought to be an American hero almost on a par with Ulysses S. Grant and William T. Sherman. Yet his renown is slight because he was long vilified by Democratic writers for causing the Republicans” 1868 impeachment of President Johnson. (Stanton refused Johnson’s demand that he resign for protecting freed slaves” civil rights.) In John F. Kennedy’s Pulitzer Prize-winning 1955 bestseller Profiles in Courage, JFK’s speechwriter Theodore Sorensen lambasted Stanton as “the surreptitious tool of the Radical Republicans” who “was seeking to become the almighty dictator of the conquered South.”

Not unreasonably, Stanton was worried in 1865 that Confederate die-hards would carry on asymmetric warfare. (President Davis called for guerilla war, but Robert E. Lee thought it dishonorable.) Stanton saw quick justice for the conspirators as a deterrent to further violence. He seems to have been right.