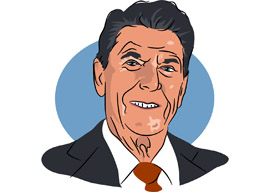 Amazingly, the complete clip has never been put online. But that’s why God created the Vanderbilt Television News Archives, from which I retrieved the footage, viewable here.

“The powerful image of an infuriated Reagan shouting at blacks was highly unusual for a white politician,” George Mason University’s Jeremy Mayer would later write in the book Deconstructing Reagan. “Highly unusual” then, totally unthinkable now. I mean really, can you imagine any white politician doing that today? Yet the message that Reagan was trying to convey”that black Americans need to stop expecting the federal government to ride in, wave a magic wand, and make their problems disappear”is even more needed and relevant now than it was thirty-six years ago.

Reagan’s outburst was the lead story on every network news show that night, and on the front page of every major newspaper the next day. Incredibly, the shouting match was covered fairly. No accusations that Reagan “laid bare his racism,” or that he tried to “whitesplain” reality to a throng of poor, “historically powerless” blacks. The objective tenor of the coverage would be just as unthinkable today as the outburst that caused it.

Personally, I remember the Bronx incident like it was yesterday, even though I was only 11 years old when it occurred. It’s forever burned into my memory because it’s the moment that changed my mom’s mind about Reagan. My mother was a Depression-era FDR Democrat. But watching the footage of Reagan giving a much-needed earful to a bunch of government-dependent shit-where-they-eaters, I”ll always remember my Brooklyn-born mom, a woman raised in poverty who got herself out without government help, remarking, “He’s right. Those people think they can just yell and scream and the government will magically make their lives a utopia. He’s telling them what they need to hear.”

Up till that point, I had never heard her utter one good word about Reagan.

My mom wasn”t alone. Gallup took a poll immediately after the Bronx shouting match, and the results were startling. According to Gallup, in June, Carter held a lead over Reagan, 39% to 32%. Reagan got a postconvention boost in July, with the numbers essentially flipped, 37% to 32%. But August? The first poll taken after the Bronx incident put Reagan ahead 45% to 29%. Dramatic, to say the least.

What Reagan did would resonate among voters today just as it did in 1980, “shifting demographics” be damned. There is still a sizable and all-too-often ignored segment of the electorate that wants a president who isn”t cowed into meekness in the face of foot-stamping, slogan-chanting, self-pitying victim groups. The perception of Donald Trump as the non-PC candidate, the in your face, tell it like it is, to hell with your feelings alpha male, is a huge part of his appeal. Although ironically, the only 2016 “candidate” (so to speak) who’s come close to Reagan’s Bronx moment is Bill Clinton, when he shouted down a bunch of Black Lives Matter goons.

Reagan was no racist. He wasn”t attacking that Bronx mob based on its race; rather, he was simply refusing to be deferential to “people of color” who were flat-out wrong. We need that kind of unafraid, brutal honesty now. If the alt-right can put aside its wackier elements, it can indeed be an influential voice in this and all upcoming elections. Affirmative action, black-on-white crime (a very serious problem that impacts Americans regardless of party affiliation), assimilation issues among nonwhite immigrants, the destruction of the indigenous populations of our European allies…these are issues that the “respectable” right no longer wants to touch. Undoubtedly, there is a need for the alt-right on the political scene. That said, the influence of the alt-right won”t be limited by “the Jews” or any other shadowy bunch of conspirators, but rather by its own fantasists who seek to counter left-wing bullshit with right-wing bullshit.

Look, you wanna spend your days dreaming of the Northwest Territorial Imperative, you wanna devote your time to electing future gauleiters to administer Nueva Germania in the Rockies, knock yourself out. As long as you don”t go Buford Furrow on anyone, you”re only harming your own ability to have real-world impact. Because none of that North American white-homeland hogwash is ever going to happen.

Pick your battle. You can waste your life fighting reality, or you can embrace a little pragmatism and fight the left. Because the left can be defeated. Reality? Not so much.

And with that I cede the floor to the commenters, who will surely point out all the ways in which I”m alt-wrong.