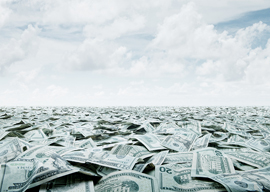 In that light, Trump’s plan is far from unreasonable. His detractors are worried about the sanctity of our national currency, but are enablers of its slow destruction. They think Trump is ushering in the next Weimar hyperinflation by threatening to print gobs of currency to pay off the debt. But that’s precisely what the Federal Reserve is already doing. Even court economist Paul Krugman admits it!

The libertarian economist Murray Rothbard once proposed a full default on bondholders as a means of forcefully cutting the debt. “Deficits and a mounting debt, therefore, are a growing and intolerable burden on the society and economy, both because they raise the tax burden and increasingly drain resources from the productive to the parasitic, counterproductive, “public” sector,” he wrote. “I would advocate going on to repudiate the entire debt outright, and let the chips fall where they may.”

The very existence of the nation-state was anathema to Rothbard, but he did have a point: Economic transactions are two-way streets. Buyers of government debt understand what they are getting into when they purchase bonds. The U.S. government is more financially reckless than Enron, Bernie Madoff, and Jon Corzine combined. This isn”t breaking news. Yet financiers invest in American bonds anyway, knowing full well that the gravy train must come to a halt. They just plan on punching their ticket early enough to get off the ride before it tumbles off the rails.

When it comes to stiffing creditors, are we supposed to feel bad that a bunch of crooks made a bad investment?

Countries have a right to control their currency”not stockbrokers. Unlike other presidential candidates, Trump is less beholden to the Wall Street crooks who do dope and crash economies. The hope is that he”ll prioritize the American people over the bondholders when handling the debt. Screwing over working people to make sure Goldman Sachs can pay out its quarterly bonuses is Clintonian crap.

I wish there were another way for the Treasury to honor its obligations. But I don”t see it. We”re all gonna feel the pain when Uncle Sam’s checks bounce. Trump is right: We might as well spread the hurt around.