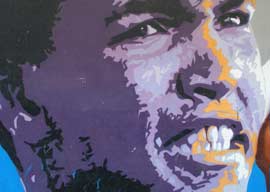 Ali relentlessly taunted other black boxers, calling them “Uncle Toms” and “gorillas.” He once said that while clinching white boxers, he’d whisper in their ears that the Black Panthers knew where they lived and were going to burn their house down. He also reportedly lied in a 1975 autobiography when claiming that being refused service at a white restaurant caused him to toss his 1960 Olympics Gold Medal in the Ohio River. According to Ali’s friend Bundini Brown, “Honkies sure bought into that one!”

Although Ali’s indomitable ego fueled his ascendancy, it would later prove to be his undoing. He continued stubbornly fighting long after he’d lost his magic, and his 1980 battering at the hands of Larry Holmes was so lopsided, Holmes”a lifelong Ali fan”reportedly cried after the fight out of guilt. In 1984 Ali was diagnosed with what is now called Parkinson’s disease. It was a grim prolonged public spectacle to view the once indomitably brash heavyweight champion reduced to a jittering mess whose condition was so familiar that comedian Greg Giraldo once joked to Pamela Anderson, “You”ve caused me to spill more seed than Muhammad Ali at a bird feeder.”

Since the 1960s are still remembered as the time when everything changed for the better rather than started falling apart, the reigning modern historians have recast Ali as a man of peace and healing and love and one-worldsmanship rather than the fearless master of physical and psychological cruelty that he was.

Two of my favorite Ali quotes”besides “So who were those little faggots?,” which will never be topped”touch upon one of the most unspeakable topics in this modern “conversation” about race which we’re all supposed to be having but are simultaneously forbidden from even beginning to have. The topic is whether blacks, for all the oppression and brutality they allegedly endure in America, have it worse in Africa.

At the 1960 Rome Olympics, Ali told a reporter:

“To me, the U.S.A. is still the best country in the world, counting yours. It may be hard to eat sometimes, but anyhow I ain”t fighting alligators and living in a mud hut.”

After Ali spent months training in Zaire to fight George Foreman, a reporter asked him his impressions of Africa. Ali’s response proves that although his IQ was twice tested at 78, he was a genius at making pithy rejoinders: