The Hate Machine That Saved the World 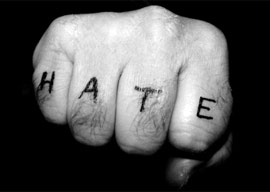 But according to the modern rules, none of that qualifies as “hate speech.” This is unfair for obvious reasons. As a wannabe functional society, what we need is a colorblind, gender-blind, and sexuality-blind definition of “hatred.”

There has to be a more scientific and bias-free way of approximating what constitutes hate. Anyone with a vested interest in defining “hate” simply to suit their own ideological/psychological needs must recuse themselves from passing judgment in any legal case regarding hatred as a crime.

I propose a grand and glorious plan to the scientific community and anyone who wants to throw gobs of cash at me for the purpose of social research: Let’s set up a database of American political discourse, which is often laden with negativity and bad vibes. To eliminate confirmation bias as much as possible, let machines do as much of the work as is possible. Have coders write scripts that are able to strip out identifying features of speakers and their targets, leaving only the negative comments in all their darkly throbbing glory.

Then direct these pared-down comments at a test subject who’s sitting in a chair hooked up to gizmos and doodads that determine his heart rate and stress levels. Get him all strapped down and plugged into the Hate Machine.

Have a disembodied robot voice say these things to the person. Make it personal by starting off with “Dear [insert their name], you and everyone like you is pure scum. You are the most horrible subhuman piece of shit—”

I think you get the point.

Get an oral testimony from the test subject. For purposes of social science—which isn’t really a science, I just think the results would confirm my suspicions—get the subject to choose which comments seemed the most hateful.

I believe the test results, once you pop back in the identifying factors, would be absolutely delicious. I believe they would confirm my long-held suspicion that when it comes to hate, modern leftists are winning by a mile.

What’s great about this is that you would be able to present these tantrum-throwing oatmeal-spillers with an ultimatum—you can either back off with all this hysterically one-sided witch-hunting scalp-collecting nonsense about “hate speech,” or you can go to jail.