The Illusion of Government 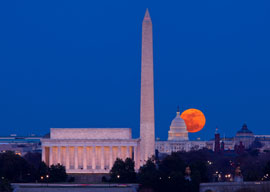 Reporters cover each other like spandex pants, but”I”m serious, think about this”they barely glance at most of the government. When did you last see coverage of HUD? The Bureau of Indian Affairs? The Department of Transportation? FAA? EPA? We get the occasional press release from these, but little else. No one knows what lurks in the bureaucratic shadows, but I promise it costs a lot.

Actually there is very little coverage of things that get a lot of coverage: the White House, DoD, and State Department. At the White House everything is tightly stage-managed, and a reporter who asks awkward questions never gets called on again. At the Five-Sided Wind Tunnel, which I knew well in my days as an inmate of the press corps, A Story would occur. Maybe a weapon didn”t work or was said not to work. So every reporter in Washington would frantically write about whatever it was.

Instead of lots of stories, it was one story lots of times. We see the same pattern with Obamacare, an abortion that contains all other abortions. It sounds like set theory. Hundreds, nay, thousands, perhaps tens of thousands of reporters write that it is hard to sign up. Wouldn”t one have been enough? How about some intelligent analysis from a software weenie who designs large programs?

What pours from Washington through the Electronic Wonderland of DC is a Bizarro World of things that don”t exist and aren”t as they are shown. For example, presidents don”t exist. What you see in Rose Garden photo ops is a virtual-reality amalgam crafted by five pollsters, three speechwriters, several calculating backroom political strategists, an ad agency, a make-up artist, and a gestures coach. The actual president is incidental. In fact, he is viewed as an impediment by his handlers, who think that the less known about him, the better. Note that the first thing they do is hide his scholastic record and SATs.

If you want something resembling an accurate picture of the government and its misbehavior, you can piece it together from the Guardian, Rolling Stone, Drudge, the Unz Review, and AntiWar.com. If you want actual government, it’s hopeless. But Washington’s antics are at least interesting”you know, like watching the fingers fall off a leprosy patient.