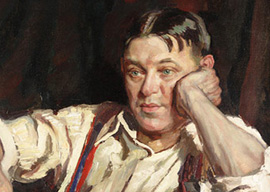 After Americans began to worship FDR and after the country went to war for the second time against Mencken’s advice, he cut back on his political writing so he could be “a carefree butterfly with no more sense of responsibility than a glamour girl in Hollywood or the President of the United States.”

Mencken despised Roosevelt, writing in his diary that the president was “a fraud from snout to tail,” adding that “he had every quality that morons esteem in their heroes.” As for the New Deal, Mencken called it “just another political swindle, simply a scheme of robbing A to buy the vote of B.” The best he could say about the New Deal was that there was one article of the Bill of Rights it hadn”t violated. So far, no soldiers had been quartered in any man’s house without the owner’s consent.

During this period he worked hard on The American Language, a massive work of scholarship about every nuance of the way Americans write and speak. Here is a passage about what he called the “unearthly” names mothers give their daughters:

The masterpieces of this art show a determination to achieve something unmatched and unimagined, at whatever cost to tradition and decorum….On what other theory is one to arrive at the genesis of Flouzette, Ulestine, Wheirmelda and Moonean? The woman who achieves so shining a novelty not only marks off her little darling from all other little darlings within ear- or rumor-shot; she also establishes herself in her community as a salient social reformer and forward-looker….The woman next door who can fetch up nothing better than Echo, Kiwanis or Apple is plainly of an inferior order.

He wrote about black names:

Medical men making a malaria survey of Northampton County, North Carolina, staggered back to civilization with the news that they had found male Afro-Americans named Handbag, Squirrel, Bootjack, and Solicitor….Many of the double names in vogue among the dark-blanket Christians of the South are the product of piety, for the uneducated Negro is almost as religious as the white Cracker. Examples are King Solomon, Queen Esther, Holy Moses, and Virgin Mary. Once in a while these combinations run to formidable length, recalling the worst imbecilities of the Puritans, e.g., I Will Arise and Go Unto My Father, Jesus Christ and Him Crucified.

There was much screeching about Mencken’s diary when it was published in 1989. Its editor, Charles Fecher, wrote in the introduction: “Let it be said at once, clearly and unequivocally: Mencken was an anti-Semite.”

Mencken an anti-Semite? This reminds me of an old joke: What do you call someone who hates blacks, Jews, Arabs, Mexicans, and the Chinese? An anti-Semite.

But in his diary, Mencken said nothing unkind about Jews in general; he simply noticed when people were Jewish. He was much more insulting about the South. He said of one man, “He is a Tennessean and will never get over it” and dismissed an Army general as “a southern cracker.” The harshest language in the whole diary was about Southern whites:

Only a rare linthead girl remains a virgin after the age of twelve. Her deflowering, in fact, is usually performed by her brothers, and if not by her brothers, then by her father. Incest is almost as common as fornication among these vermin, and no doubt it is largely responsible for their physical and mental deterioration.

Mencken called poor whites “ill-fed men and filthy, slatternly women and children, who all live like animals and are next to animals in their habits and ideas.”

But there was nonstop howling about anti-Semitism, and even serious talk of taking his name off the H. L. Mencken room at the National Press Club. These self-righteous asses were ignoramuses. Mencken had written very rough things about Jews that had been in print for years. In A Treatise on the Gods, he wrote:

As commonly encountered, they strike other people as predominantly unpleasant, and everywhere on earth they seem to be disliked. This dislike, despite their own belief to the contrary, has nothing to do with their religion: it is founded, rather, on their bad manners, their curious lack of tact. They have an extraordinary capacity for offending and alarming the Goyim.

However, he also wrote that the Bible is a remarkable work of beauty:

All these transcendent riches Christianity inherits from a little tribe of sedentary Bedouins, so obscure and unimportant that secular history scarcely knows them. No heritage of modern man is richer and none has made a more brilliant mark upon human thought, not even the legacy of the Greeks.

Mencken’s harshest passage about Jews is in his introduction to his translation of Nietzsche’s The Antichrist:

On the Continent, the day is saved by the fact that the plutocracy tends to become more and more Jewish. Here the intellectual cynicism of the Jew almost counterbalances his social unpleasantness. If he is destined to lead the plutocracy of the world out of Little Bethel he will fail, of course, to turn it into an aristocracy”i.e., a caste of gentlemen”but he will at least make it clever, and hence worthy of consideration. The case against the Jews is long and damning; it would justify ten thousand times as many pogroms as now go on in the world. But whenever you find a DavidsbÃ¼ndlerschaft making practice against the Philistines, there you will find a Jew laying on. Maybe it was this fact that caused Nietzsche to speak up for the children of Israel quite as often as he spoke against them. He was not blind to their faults, but when he set them beside Christians he could not deny their general superiority.
“The Antichrist

Mencken was accused of being pro-Nazi, but he called Hitler “an idiot followed by idiots.”

On the Jews streaming out of Germany after Hitler came to power, Mencken wrote: “Why shouldn”t the United States take in a couple of hundred thousand of them, or even all of them?”

At one point in his career, Mencken was mistakenly identified as Jewish in some kind of who’s-who listing. When he learned about this, he said he didn”t much mind. His best friends were Jewish and through years of wear and tear he was pretty nearly circumcised.

In his diary, Mencken also said a few mildly unkind things about blacks. The ignoramuses went off like firecrackers about this, too, but they had obviously never read any Mencken. As far back as 1910, he wrote:

So long as we refrain, in the case of the negro loafer, from the measures of extermination we have adopted in the case of parasites further down the scale, we are being amply and even excessively faithful to an ethical ideal which makes constant war upon expediency and common sense.
“Men Versus the Man

However, Mencken recognized the talents of individual blacks. He admired the black writer George Schuyler and was very impressed with a 1926 collection of essays by black intellectuals called The New Negro: An Interpretation:

Here a Negro of a quite new sort comes upon the scene”a Negro full of easy grace and not at all flustered by good society. He discusses the problems of his people soberly, shrewdly and without heat….Here, indeed, the Negro challenges the white Southerner on a common ground, and beats him hands down.

However, in the same article, Mencken says this about Negro progress:

There are serious difficulties in their way. The vast majority of people of their race are but two or three inches removed from gorillas: it will be a sheer impossibility, for a long, long while, to interest them in anything above pork-chops and bootleg gin.
“”The Aframerican: New Style,” in the American Mercury

But let us not forget how he wrote about whites:

If all the farmers in the Dust Bowl were shot tomorrow, and all the share-croppers in the South burned at the stake, every decent American would be better off, and not a soul would miss a meal.
“Minority Report: H. L. Mencken’s Notebooks

If all the inhabitants of the Appalachian chain succumbed to some sudden pestilence tomorrow, the effect upon civilization would be but little more than that of the fall of a meteor into the Ross Sea.
“Minority Report: H. L. Mencken’s Notebooks

Sometimes Mencken thought of himself as an American Voltaire, but even Voltaire said this when he was asked for a comment after learning an enemy had died: “He was a great patriot, a humanitarian, a loyal friend; provided, of course, he really is dead.”

Jared Taylor is the editor of AmRen.com and the author of White Identity. This was an excerpt from a recent speech he delivered at a private gathering of Mencken admirers.