The Joy of American Unexceptionalism 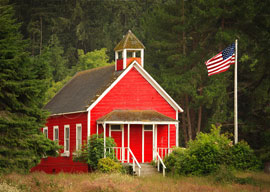 Murray’s insight is that we do have a more independent source on how American was actually different: the views of touring Europeans. They had their biases”most notably, they came from a continent with cultures and constitutions dominated by the class system. But if you want to know how America was unique, they had plenty to say on the topic.

Of course, Murray has his own preferences. He’s a small-town boy who likes his government limited and his society middle-class. But that is close to the cultural-ideological template of the old America that once impressed and annoyed the world. Today’s Tea Party attitudes aren”t that different from those of 1773.

As numerous wealthy 19th-century European visitors observed (and often complained), Americans tended to resemble the Murrays of Newton, Iowa in their Whiggish assumptions and their civic culture that made practical the American emphasis on liberty. Murray cites four main cultural elements: industriousness and enterprise, social egalitarianism (no forelock-tugging to hereditary superiors), religiousness and self-discipline, and neighborliness and social trust.

Murray’s low-key libertarianism”with its practical emphasis on how, if we aren”t going to depend on the government, we”ll have to trust our neighbors to help us get over the inevitable rough patches”is reminiscent of that of another Midwesterner, Robert A. Heinlein, author of the anarchist cult novel The Moon Is a Harsh Mistress. Indeed, Heinlein’s sci-fi novels of space settlement remain among the more interesting fictional explorations of how Americans attained and maintained self-government.

Reviving Wisconsin historian Frederick Jackson Turner’s once-famous 1893 theory of the centrality of the frontier in the development of what was novel in the American character, Murray observes:

Turner’s thesis was highly influential through the 1950s, for the same reason that movie Westerns at that time exalted the relationship between the frontier and American individualism.

Like the future, the past just ain”t what it used to be.

After a last revival of cowboy movies during the hippie era (when it was realized that many frontiersmen had long hair, a subject of obsessive interest in 1970), Westerns were largely supplanted by urban gangster and detective movies with which filmmakers of Ellis Island ancestry could better relate. (Not surprisingly, Rubin added to her list of deepest beliefs: “Nearly all wisdom is found in the Godfather movies….”)

We have no vocabulary anymore for expressing Americans” urge to live in an American state the way that, say, Danes like living in the Danish state and Jewish Israelis enjoy living in the Jewish state.

But perhaps someday a president will answer the question of whether he believes in American exceptionalism by saying, “America is exceptional to me, because it’s my country.”