The Magical World of African Journalism 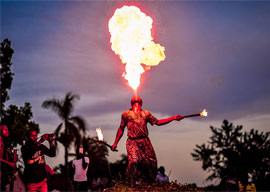 I can think of no other press corps on any other continent who have the insight and bravery to admit that the world is ruled by ghosts and demons and goblins and zombies.

Reporters in Zimbabwe share the horrifying story of a man who returned from the dead after 39 years to finally demand a “decent burial.” South Africa’s Daily Sun is a never-ending merry-go-round of miraculous headlines such as “THE GIRLS WHO PEE SPOONS!,” “TORTOISE SPEAKS ZULU!,” “INVISIBLE SHIT TERROR!,” and “ONLY ZOMBIES LIVE HERE!”

While the so-called “journalists” of the Western world keep digging for a Russian collusion scandal that never has and never will exist, reporters in Ghana are the only ones with the cojones to tell the true story of a man who’s been colluding with Satan for 17 years to murder at least 675 people. While the flabby-minded mandarins at CNN worry about criminal Mexican babies, residents in Ghana have to contend with an evil spirit that “meets its victim, compels the victims to suck her breast and in the process kills the person.” While progressive sissy-pants of all 56 genders wail about Betsy Devos’s fleet of yachts, children in Zambia miss school for weeks at a time because witchcraft scared all the teachers away. Sheltered in their little white bubbles, Western reporters will never have to deal with Nigerian witches who steal men’s genitals or a short, “horny creature…with giant genitals,” a baboon’s footprints, and a white man’s face who “raped women in their sleep and sometimes excreted on their nightwear.”

Hey, Mr. Pulitzer—can we get a little love here?

But every now and then, just like every other killjoy of every other race and continent, some spoilsport will come along and bust everyone’s balloons in an attempt to take a “realistic” approach to why Africans, despite their surfeit of magic, have the lowest life expectancies and the lowest incomes of anyone on the planet and possibly even the entire solar system.

Some Rwandan dillhole with the goofy-ass name of Shyaka Kanuma claims that Africa is “such a backward place…the continent of basket case countries” because “African Mentalities Account for Africa’s Backwardness.”

In short, he’s trying to be all “factual” by claiming that the African mindset is to blame for Africa’s endlessly grim problems.

He’s wrong, of course, not to mention very racist, despite his ooga-booga-sounding name.

As all wise men know, Africa only makes sense if you believe in magic.