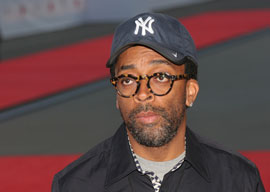 One little-mentioned aspect is that black men tend to do much better than black women in lead roles, winning sixteen Best Actor nominations since 1985 versus only six Best Actress nods. And just two of those half dozen were for traditional romantic leading-lady roles, which is one of those festering resentments”black women worry that they aren”t as sexy as black men or white women”that leads to public denunciations of white men. Why? Because they”re always politically handy to blame.

Up through the 1960s, Hollywood tended to prefer gentlemanly West Indian-Americans like Belafonte and Poitier to more bumptious American blacks. But over time, many whites came to find entertaining the black American tendency toward egomania, as represented by Muhammad Ali and Cam Newton in sports. A classic moment in African-American awards megalomania and entitlement was singer Kanye West rushing the stage to object””Imma let you finish“”to Taylor Swift winning a trophy instead of BeyoncÃ©.

In a 2003 Supreme Court decision upholding affirmative action in public college admissions, an embarrassed Sandra Day O”Connor justified her trampling on the Equal Protection Clause with the claim that quotas would no longer be necessary in 25 years. We”re now past halfway (and, of course, virtually no progress has been made on objective measures such as test scores). But even the one field where proportionality exists”acting Oscars”is treated as a national crisis.

One possible response to the Oscar black lack would be to create a separate category just for blacks so they are assured of always winning something. Another would be to throw out voting and simply have the show’s producer make up a slate of winners. Diversity has made democracy out of date.

Granted, from the perspective of 1963, this isn”t what was supposed to happen. Race was expected to decline in salience after the civil rights victories. But instead, old-fashioned blood-and-soil chauvinism has steadily revived, with an accompanying stream of dopey racial brouhahas like this latest one.

To cover up this trend toward racialism, the one group you are allowed to criticize”whites”is demonized ever more vociferously for its racism”past, present, or imaginary.

For instance, black director Spike Lee is denouncing the Academy Awards for being “lily white.” Granted, when it comes to being ethnocentric, Spike is slightly to the right of Shaka Zulu. But he’s racist against whites, so that makes Spike a hero. In 2016, principles don”t matter; just whose side you”re on.

One pragmatic question is whether it’s best to permit one’s group to be defamed without career retaliation. Personally, I”m in favor of free expression, the more the better.

But recall what happened to Spike the one time he let slip that his widely admired animosity toward whites is actually focused heavily on Jewish whites. His 1990 movie starring Denzel Washington as a jazz musician, Mo” Better Blues, featured John and Nicholas Turturro as Moe and Josh Flatbush, stereotypical Jewish entertainment managers who exploit black talent. Spike was thumped hard in The New York Times, forcing him to reply at length in an op-ed under the I”ve-stopped-beating-my-wife headline: “I Am Not an Anti-Semite.” His previously fabulous career tailed off. His 1992 Malcolm X, the kind of well-crafted, socially conscious epic biopic typically showered with Academy Award nominations, didn”t earn Spike the expected Best Picture, Director, and Screenplay nominations, and most of his feature movies since then have been a mess.

A quarter of a century later, Spike has learned a valuable lesson: You can”t get in trouble for anti-whitism because it isn”t even a word.