The Pin-up’s Guide to Timing Your Suicide 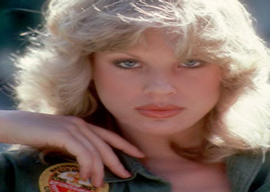 “Passed around by dozens of Hollywood leading men over a decade,” says the Mail, the model “had become damaged goods. When she turned 30 in 1974 her star had faded and she felt used, abused and unwanted by the Hollywood establishment.”

That’s when Young took her own life, but in a way she “thought would send a powerful message to the men who she believed had tormented her for so long.”

So on Palm Sunday of that year, Young shot herself in the head with a .38. Except she supposedly did it lying on a bed draped in an American flag, with a pentagram drawn on the floor.

It’s a scene so utterly “1970s” it sounds like something out of Russ Meyer’s freakazoid anti-Valentine to showbiz, Beyond the Valley of the Dolls (1970). Which is particularly noteworthy because the Mail‘s source is, coincidentally, someone named Melanie Myers.

Myers, a friend and neighbor who”d been on the scene, says Young’s bedroom wall was covered with “news clippings, magazine articles, everything you could think of [about the Playboy mogul]. Written across it was something like: “Hugh Hefner is the devil.””

Young’s suicide note, this friend continued, singled out Hefner and her former lover, director John Huston, but Myers is quick to include the currently headline-making Cosby as one of those who “used and spat out” her late friend.

Now, admittedly, Myers is, we”re informed, currently employed as an astrologer. And this is the Daily Mail we”re talking about. So maybe Young’s frankly awesome suicide never caught on as Hollywood Babylon lore because it didn”t really happen that way.

Or maybe no one was quite ready to call the party off as early as “74.

In November 1968, when Young’s Playboy spread appeared, not even a couple of assassinations and other major bummers had been quite enough to harsh the West’s mellow quite yet.

In the obligatory interview that accompanied her pictorial, Young describes herself as a struggling painter. She dreams of studying in Paris. She lists her “main weakness” as her “desire to be alone,” adding, “It’s probably selfish.”

Her successor, Dorothy Stratten, was also asked about her goals (“To become a successful actress and do a lot of traveling”), as well as her astrological sign (“Pisces”) and her “turn-ons” (“Life, love, poetry and little animals”).