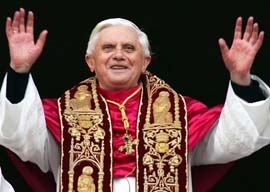 In a 2009 article, Taki’s Mag contributor Thomas Woods noted that such statements contradict earlier papal non-interventionist sentiments such as this one expressed by Pope Leo XIII (1878-1903):

If I were to pronounce on any single matter of a prevailing economic problem, I should be interfering with the freedom of men to work out their own affairs….[M]en must realize in deeds those things, the principles of which have been placed beyond dispute…. [T]hese things one must leave to the solution of time and experience.

[W]ithin Catholic tradition there is ample testimony to the wickedness of monetary debasement, fractional-reserve banking, and numerous other institutional commonplaces we hardly give a second thought….[T]here is no moral or economic case for the monetary system under which we are forced to live—a system that has never been introduced voluntarily but has always been enforced by violence, with the police empowered to suppress alternatives. The insidious nature of the government’s monopoly on money becomes even clearer when a currency degenerates into hyperinflation, all known examples of which have occurred under monopoly fiat-money systems. Short of a completely state-run system, it is as far from a free market as one can imagine.

The system we have now involves a government-privileged central bank with a monopoly on the creation of legal-tender money, charged with watching over a cartel of ostensibly private but also state-privileged commercial banks. Its debasement of money makes it very difficult for people to save for the future without having to become speculators of one kind or another. A hard-money system, on the other hand, permitted the average person to save for the future simply by accumulating precious-metal coins, which, back in the days when they served as money, held or increased their value over time. Who today would save for the future by piling up Federal Reserve Notes? Society’s most vulnerable now must enter the stock market or take other kinds of risks just to hold on to their wealth. Is this not a moral issue?….

The monopoly central bank institutionalizes the problem of moral hazard. There is no physical limitation on the creation of additional paper money. For that reason, major market actors know there is no physical constraint on bailing them out in emergencies.