The Pope You Will Always Have With You 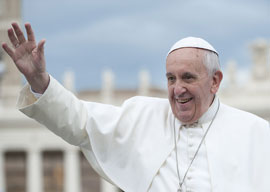 Egypt, Pakistan and Mongolia all enjoy more economic equality than the United States.

Yet this same document also condemns “all forms of collectivism” and “sets limits for state interventions”“the same “interventions” the pope calls for in other paragraphs. Like so many papal declarations concerning temporal matters, this one could just as easily have been entitled “Ex Altera Parte, Ex Altera Parte””“On the One Hand, On the Other Hand.” If anyone can use Evangelii Gaudium to “proof-text” their pet economic philosophy, what good is it, really?

On balance, though, Pope Francis displays a naive faith in the wisdom and benevolence of the state, especially for someone who survived the Dirty War. (Not all Argentinian priests were so fortunate.)

When the pope talks about “wealth distribution,” does he mean the century’s worth of “aid” to Africa that’s been anything but?

And who are “the poor”? At least in America, the “poor” are the “rich” that Jesus warned us about: fat, lazy, entitled, and obsessed with trinkets and passing pleasures. These “poor” have more disposable income than their middle-class fellow citizens. Is that “justice”?

The pope’s staunchest critics feel obligated to aver that the man’s intentions are good. These same writers are no doubt familiar with the old saying about the cobblestones of Hades. Not being Catholic, perhaps they”ve never heard St. John Chrysostom’s line about the road to hell actually being paved with the skulls of bishops. Maybe it’s a little of both.