The Resort That Was Too Big to Fail 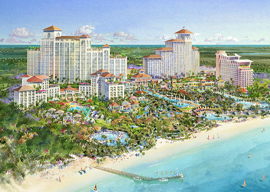 The entire board of Baha Mar, including Izmirlian, resigned last November following a brutal summer during which they sought bankruptcy protection in the USA under Chapter 11 laws. Their restructuring plan called for the total removal of CCA, only their plan was never realized. CCA pushed the Delaware court presiding to throw out Baha Mar’s case, arguing that the development and companies involved were Bahamian, not American, and should be recognized as such. As Baha Mar fought to save itself from Bahamian liquidation and the consequent loss of control over shares, a media spat erupted. A Baha Mar lawyer “alleged that the two sides were engaged in a “bad faith” effort to stop Baha Mar from restructuring,” according to Law360. Accused of collusion with the Chinese firms, the government lashed back. Izmirlian was reminded via news media that he was “a resident, not a citizen” of the Bahamas. The message was clear: Be quiet, or risk expulsion from the country his family had made home.

Some islanders claim corruption runs high amongst Bahamian officials, alleging that China “owns” the Bahamian government, citing as evidence various “gifts” from Chinese companies like the huge new sports stadium. Similar sources believe the government fought so vigorously to proceed with Baha Mar’s bankruptcy in the Bahamas because this way, any evidence of bribery or political backhanders relating to Baha Mar could never be summoned in court, a risk it couldn”t take in a U.S. courtroom. The case was dropped in September, although a U.S. judge named Kevin Carey told The Tribune that Chapter 11 would have been “an ideal vehicle for restructuring“ Baha Mar had the Bahamian government and Chinese contractor not objected to it, with the likelihood of endless lawsuits following a U.S. bankruptcy case.

Deloitte & Touche are now running the liquidation after the first liquidator”whose parent company, KRyS Global, is based in the Cayman Islands”was dismissed for attempting to hide illicit capital flows into politicians” accounts, or so the rumors go; however, islanders say the claim is “pure speculation” and wholly unsubstantiated. Equally “ludicrous,” as former Baha Mar director Dionisio D”Aguilar stated, is the fact that the $50M receivership loan was paid not by Ex-Im Bank but by yet another Chinese state-owned lender. Thereby reinforcing the impression that Baha Mar was fighting not only with the Bahamian government but also with China, Inc. itself.

A few, but by no means the majority of, islanders believe China will ultimately own the title to the real estate upon which Baha Mar stands. “Sooner or later a hotel chain will take over the condos and the running of the hotel rooms,” said one local source, off the record, “and China will own the title on the property and the casino.”

Of course. The casino… The real money machine. Another knowledgeable source confirmed this underlying strategy by saying: “Expect to read sometime soon the headline “Hyatt takes over Baha Mar”…which means the title is Chinese, [and] the operating contract goes to Hyatt, who will pretend to be the owners, while the casino is Chinese-owned and -operated.”

One local banker called the future purchase of Baha Mar, at a liquidation discount, the “deal of the century.” The project was so big it had been expected to make up 12% of the annual GDP, forging wealth-creating opportunities for locals as well as foreign owners. The duration of this continued shortfall in projected GDP and the “handling of the Baha Mar” problem, as S&P put it, will decide the Bahamas” next credit rating.

The deal of the century? Or the steal of the century? One thing’s sure: The locals are not pleased with their elected officials. Not with 2,000 layoffs and the closure of trainee programs, affecting poorer Bahamians anticipating job opportunities in the service sector. Nor are they happy with the estimated $100M sum owed to Bahamian investors”not to mention the contractors and suppliers who were hung out to dry when the resort (twice) failed to open.

Lest anyone remain unsure of how the story ends, D”Aguilar’s comment to The Tribune about the fate of local creditors was characteristically frank:

“They are going to get screwed all the way,” he said.