The Rise of the Factual Feminist 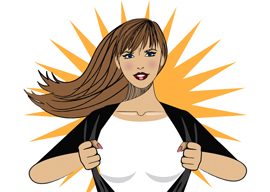 My personal favorite was Iowa’s Joni Ernst. I fell in love when I saw her roll her eyes in an interview on Fox when she was asked about the “war on women.” She pointed out that not only is she a woman but she’s been to war and comparing the two is an insult to the soldiers who put their lives in harm’s way every day. Since pointing that out, Ernst has become the first woman to represent Iowa in Congress and the first female veteran in the Senate. (I won $50 when she was elected and I have much more bet on Ted Cruz for president, so take heed.)

One of the most satisfying and symbolic losses this election was Wendy Davis. While she has been pushing this sob story of herself as a struggling divorced mom trying to get a degree while raising two girls, the truth came out and it’s pretty vile. She wasn”t struggling when she went to school. She was bankrolled by her millionaire husband. Worse than that, she abandoned her two-year-old at the time to go do it. Worse than that, she dumped her sugar daddy the day after he was done paying her tuition. And worst of all, she gave up custody of her daughter after it was over, claiming: “This just isn”t a good time.”

The kid was 17 at that point. That’s like having a 71st trimester abortion.

Davis and the old feminist spinsters applauded her mission as freeing women from their burdens”but the rest of the country saw it as excusing them from their responsibilities. Texas battleground organizer Chelsea Natividad had a meltdown after the loss and said, “If you”re a woman and you voted Republican, fall off of the face of the earth.” There were a lot of young women elected yesterday, but they weren”t Democrats. They were Republican. And black!

The Wendy Davis ideal is no longer something women look up to. She’s something to, at best, pity”and at worst, vomit all over. The old liberal experiment has finally failed. We tried aborting tradition and it didn”t work. If it did, you wouldn”t need to enforce it with equality legislation. Nobody wants an America where women aren”t allowed in the workforce. Our love of freedom includes that handful of freaks who were never meant to have kids and raise a family. However, we now realize that the old way worked much better, and we”re ready to embrace it. Feminism isn”t dead. It just woke up, and today it’s about recognizing that women are not men with tits. They are completely different human beings born with completely different characteristics. They also make great housewives.